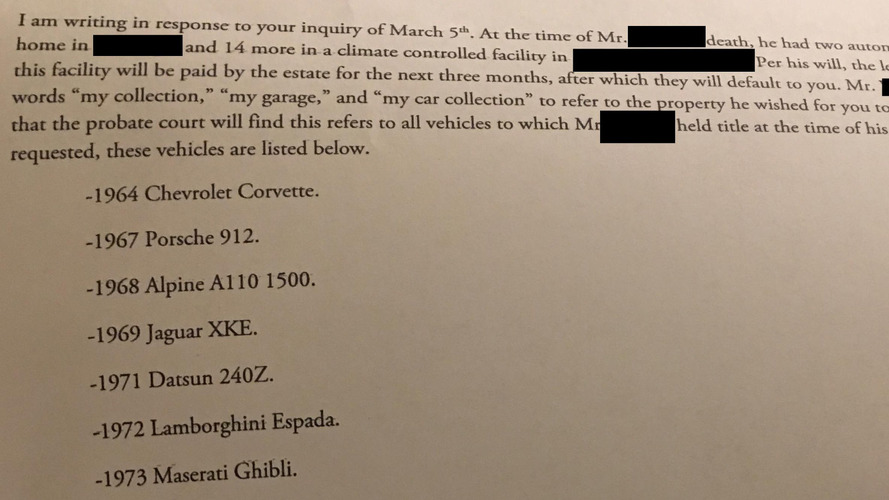 We want to believe….

When was the last time you talked to your mysterious uncle? You know the one – he misses birthdays and holidays because he’s always on some kind of oddball adventure. Nobody in the family knows exactly what he does for a living, or if they do, they don’t talk about it. Yeah, that uncle. You better be nice to him, because he just might give you his million-dollar car collection when he kicks the bucket.

Allegedly that’s exactly what happened to an unnamed Reddit user. Two days ago a post appeared on the site that had all the makings of a car-lover’s dream – a reclusive uncle shunned by family for over a decade left 14 cars to an unsuspecting heir. Among them were a bevy of Porsches, a Lamborghini Espada, the requisite Ferrari, a Datsun 240Z, and what secret collection would be complete without a vintage Chevy Corvette? Other noteworthy machines include a 1969 Jaguar XKE, a 1973 Maserati Ghibli, a pair of collectible BMWs, and a properly spectacular 1968 Alpine A110.

The list also included a 1980 Ford Bronco. More on that in a moment.

We say allegedly because the authenticity of this story is highly dubious, to say the very least. For starters, the original Reddit poster has since been deleted, along with several follow-up posts made by that user. There is exactly zero photographic evidence that the cars in question even exist. The only tidbit aside from the story (which itself sounds a few degrees beyond fishy) is a picture of a letter the heir supposedly received from the legal team handling the dead uncle’s estate.

The story has generated nearly 2000 comments, many of which cast serious doubt on the authenticity of the letter. We aren’t legal professionals, but there does seem to be a striking level of informality for what would almost certainly be a million-dollar collection of automobiles. Furthermore, the deleted user apparently had parents who fit the classic definition of butt monkey, because a bevy of comments indicated the folks wanted the beneficiary to sell everything except the Bronco, because it would be “reliable.”

Friends, if you want to get 2000 comments on a Reddit post, you tell a bunch of car fanatics that your parents say to ditch the bevy of supercars given to you, but keep the 1980 Ford Bronco.

Take a look at the letter and let us know what you think about this fantastic tale. In the meantime, we’ll reserve further judgement until additional proof comes long.