New Audi A8, A7, A6 official sketch reveals evolutionary design 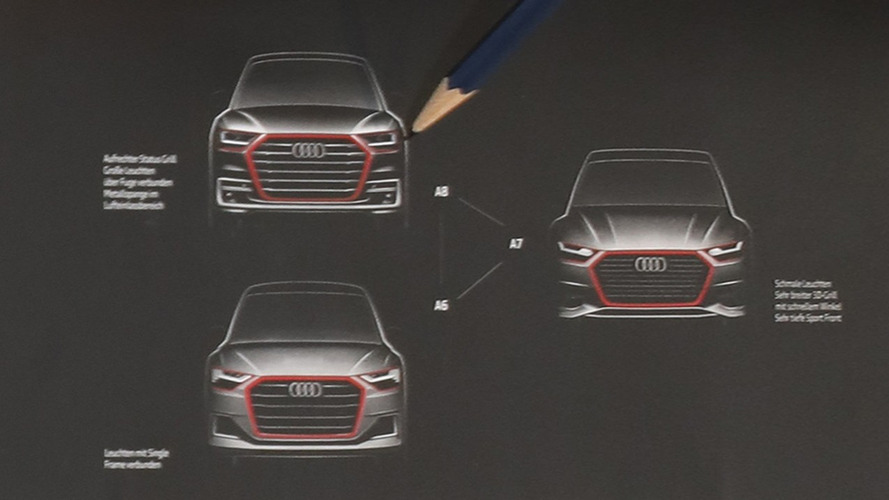 The A7 appears to be the sportiest of the three.

Audi’s chief designer Marc Lichte sat down and had a chat with our French colleagues from L’argus about the all-new A8 and other top-tier models, such as the A7 Sportback and the A6 Sedan. He did more than just speak about the trio of new premium models from Ingolstadt as he also showed them a sketch to better point out the differences from one model to the other.

At a first glance, you’re probably thinking the three cars are very much alike, but the devil is in the details. Look closer and you’ll notice the large single frame grille has a different configuration on all three cars. It’s more imposing on the A8 fullsize sedan, while on the A7 it provides the car with a sportier look also enhanced by the extra creases on the hood. The A6 Sedan has a slightly smaller version of the grille and a different design of the bumper.

The amount of chrome trim used at the front also varies greatly, with the A8 getting more than the other two as one would expect from a range-topping model. It has two C-shaped shiny pieces at the edges of the bumper connected to one another through a central fin. Since the A7 Sportback is the sportiest of the bunch, it eschews most of the chrome trim for a more aggressive dark theme. As for the A6, it has a pair of L-shaped bits of chrome trim, but these are not connected in the middle as they are on the A8.

As for the headlights, these are positioned very close to the massive grille on the A8, but on the A7 and A6 Sedan there is a visible distance between the edges of the grille and those of the clusters. In addition, the interpretation of the LED daytime running lights varies from one model to the other.

Here are the three models testing in the real world as disguised prototypes (A8 top, A7 middle, A6 bottom):

Marc Lichte has promised to implement a greater styling differentiation among the models part of Audi’s extensive lineup while maintaining a similar design language. It remains to be seen whether these variations will be enough to allow the untrained eye separate the A8 range topper from the sleeker A7, and so on.

The first to see the light of day is going to be the A8 due to be unveiled this summer, according to L’argus. That means it will be presented to the public in September at the Frankfurt Motor Show and should go on sale before the year’s end. At some point in 2018, the A7 Sportback will make the transition towards a new generation and will be followed by the new A6.

Gallery: Next-generation Audi A8, A7, A6 official design sketch