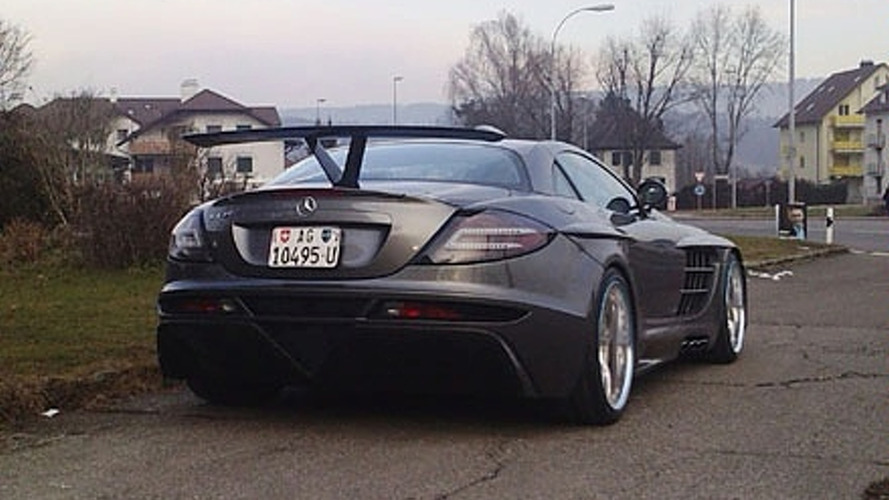 Swiss tuner FAB Design's got a modified Mercedes McLaren SLR coming to the Geneva show, and sneak peeks do not look promising.

Is it a bird? A plane? Did Mercedes build the latest Batmobile? None of the above. This exercise in extreme modification or questionable taste, depending on your opinion, is the Mercedes McLaren SLR modified by FAB Design of Switzerland and scheduled to appear at the Geneva show March 5-15.

Spotted at FAB Design's headquarters, the radical SLR sports an extensive body kit that exaggerates the SLR's already distinctive features. Monstrous sill extensions and a reworked front bumper make it look even lower and wider than it already is, and the Mercedes' subtle Formula One influence is made much less so, especially from the front. Monstrous wheels, additional cooling ducts and an unusual tall spoiler that online wags have dubbed a "TV antenna" and a "cheese table" complete the look.

There's no word as to if there are any modifications beyond the body kit, but in keeping with FAB Design's M.O., the car has already offended the sensibilities of many online enthusiasts. Even before its introduction, the McLaren SLR has inspired horror and disgust among car people, much like the FAB Design Maybach and Mercedes CL body kits have. There's a chance that it will look better when seen on the show floor...but that doesn't seem likely.

Autoblog.nl has called for its readers to pose with the car at the Geneva show, and to post their opinions on the car in its comments. We've no doubt that you'll do the same.