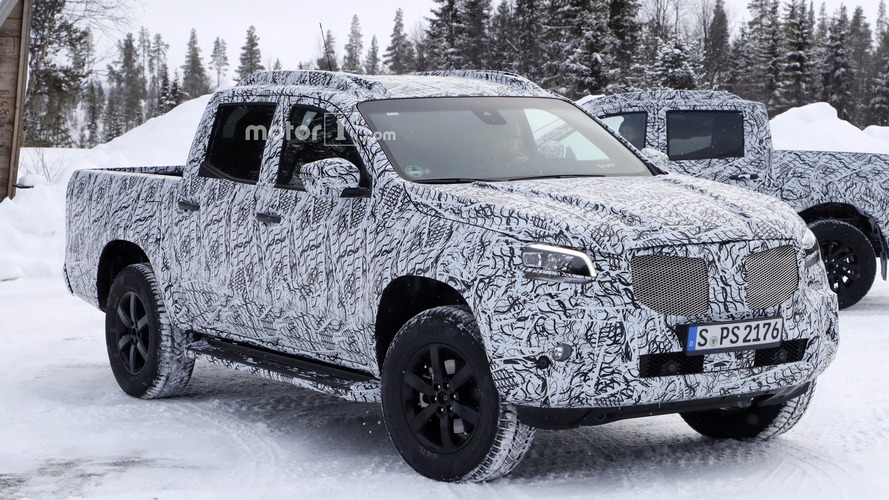 Why does it have two fuel caps?

Having seen the Mercedes X-Class in a pair of near-production concepts last year, it’s really not that hard to imagine how the posh midsize pickup truck is going to look like in final version. Here we have a prototype with less disguise than ever allowing us to check out the headlights featuring an LED strip of daytime running lights in the same vein as most of the company’s models.

We are also able to catch a glimpse of the taillights, which although remain partially masked by the swirly camouflage, already we can see the clusters are different than those of the Nissan Navara upon which the X-Class will be largely based. To set the two workhorses apart, Mercedes’ designers are doing their best to give the premium pickup truck its own styling, which is already visible on this test vehicle. The fact that the dashboard was also hidden under a black piece of cloth suggests the cabin is also going through some changes to differentiate the X-Class from its more humble origins.

The pickup truck’s side profile reveals the prototype rocked a pair of fuel caps on the rear fenders, which can only mean one of the following three things: one of them was fake, the X-Class had dual fuel tanks for superior range, or it was a plug-in hybrid and the second cap was to conceal the charging port. That being said, it’s unlikely the prototype had an electrified powertrain since usually test vehicles fitted with a hybrid setup have yellow warning stickers. Not only that, but Mercedes’ hybrids usually have the second cap to fill up the battery on the rear bumper under the right taillight, not on the fender.

In regards to the oily bits, the top-of-the-range version is going to employ a V6 turbodiesel engine whereas lesser models will be fitted with smaller four-cylinder units. The cheaper ones are going to feature a front-wheel drive setup, which means you’ll have to fork out more money to get an X-Class with Mercedes’ 4Matic AWD system.

Slated to debut in full production guise later this year, the first-ever X-Class is going to be sold in various regions all over the world, but not in United States, at least not for the time being. Production will kick off before the year’s end at Nissan’s factory in Barcelona, Spain and from 2018 at Renault’s assembly plant in Cordoba, Argentina.