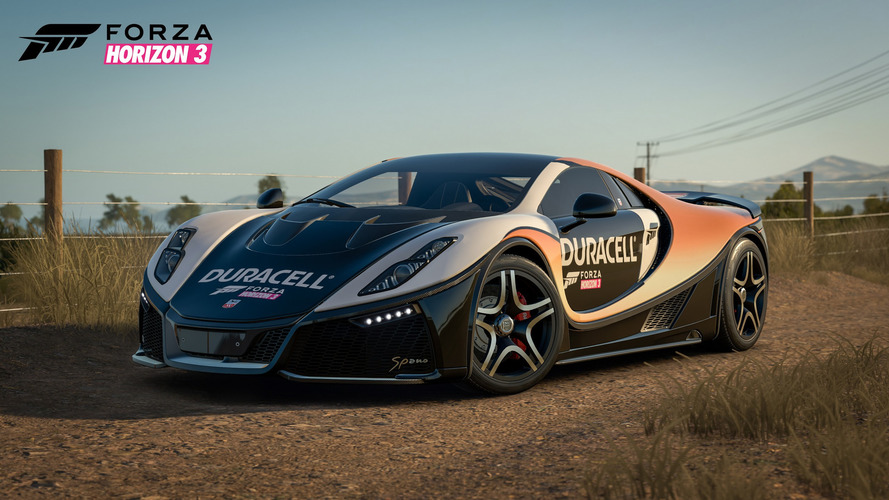 Gamers rejoice as the Duracell-themed 2016 GTA Spano is up for grabs without having to pay for it.

The Tata Racemo sports car concept currently on display at the Geneva Motor Show wasn’t the only model added for free to Forza Horizon’s 3 virtual garage last week considering 2016 GTA Spano was also on the list of freebies. The V10-powered Spanish supercar wearing a Duracell livery is now available in the Xbox Store and all you have to do is simply search for “Forza Horizon 3 GTA Spano” and download the car.

It is worth pointing out the car in question is actually the updated version introduced a couple of years ago at the Geneva Motor Show. The “totally new” model is being produced in a limited series of 99 cars and all of them share a mighty biturbo 8.0-liter engine with a monstrous 925 horsepower (690 kilowatts) and 900 pound-feet (1,220 Newton-meters) of torque. The immense power is channeled to the rear wheels through a seven-speed sequential gearbox.

If you’re wondering about the supercar’s performances, the carbon fiber-bodied GTA Spano needs only 2.9 seconds to complete the 0-62 mph (0-100 kph) sprint and will max out at a respectable top speed in excess of 230 mph (370 kph). With so much power and weighing just 1,400 kilograms (3,086 pounds), it’s no wonder the revised Spano is an absolute rocket.

The newest car entry in Forza Horizon 3 coincides with the launch of the “Duracell Car Pack,” hence the GTA Spano’s battery-themed exterior finish. The last pack included in the game’s Car Pass can be had as a separate purchase or as part of Ultimate Edition variant of FH3. A total of seven cars are included in the pack, as follows: