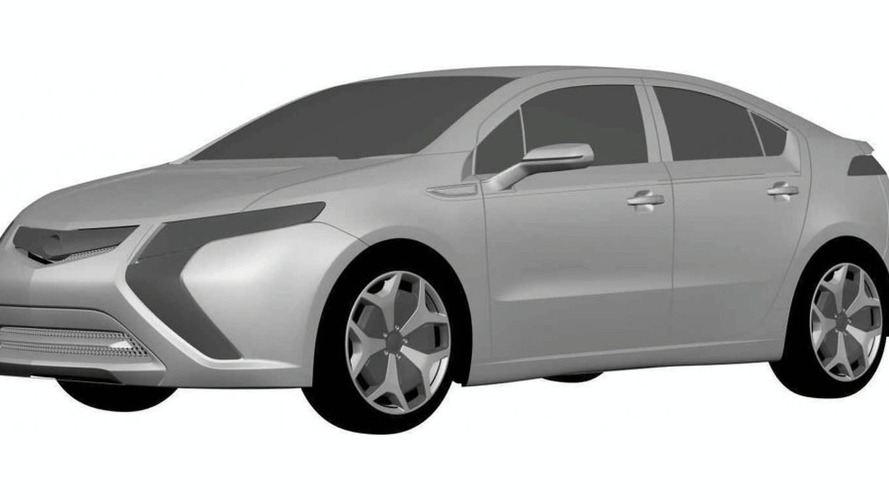 Opel Ampera will be GM's European version of the Chevy Volt powered by GM's Voltec plug-in hybrid system most recently seen in the Cadillac Converj Concept. The Ampera is scheduled to hit European showrooms sometime in 2011.

This early sketch of the upcoming Opel Ampera comes to us courtesy of a leak from the European Office for Harmonization of the Internal Market (OHIM), where trademark records are kept.

The Opel Ampera will be GM's European version of the Chevy Volt - a plug-in hybrid set to go on sale next year in the North American market.

Judging from these sketches, it appears that the Ampera's design will be in adherence to Opel's current paradigm and will follow closely the cues from the new Insignia which just recently won a European Car of the Year award.

The Ampera will be powered by GM's Voltec plug-in hybrid system most recently seen in the Cadillac Converj Concept which debuted at the Detroit auto show in January. It features an electric motor coupled with a gasoline engine which is used to recharge the lithium-ion batteries. It will have a range of 40 miles (65 km) on pure electric power and can be recharged in about 2 to 3 hours via a standard 230-volt European outlet. With the help of the gasoline engine acting as a generator for the batteries, the range of the Ampera will be about 500 miles (or 800 km).

The Ampera is scheduled to hit European showrooms sometime in 2011 and will be making its official debut at the Geneva motor show next month.