Bugatti Chiron gets a boat buddy in Niniette 66 luxury yacht 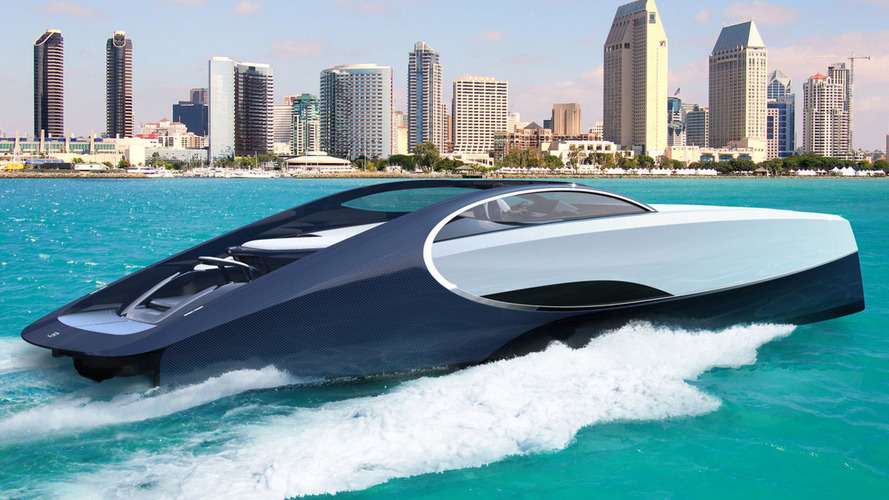 Built by Palmer Johnson for Bugatti, it does 50 mph and is stunning to behold.

Here’s one for the affluent individual who just purchased a $2.6 million Bugatti Chiron, but is unhappy with its performance on water. Don’t worry dear friend – Bugatti understands your pain, which is why the company partnered with noted yacht manufacturer Palmer Johnson to create the Niniette 66. Granted, at 66 feet long it is a tad larger than the Chiron, and its top speed of 44 knots (roughly 50 miles per hour for you land lovers) isn’t what you’d call time-distorting performance.

But just look at it. Oh to be filthy rich.

Obviously this isn’t a typical boat with a Bugatti badge. The project began back in 2015 with a meeting-of-the-minds at Bugatti and yacht manufacturer Palmer Johnson. Their goal was to create something completely new, fusing the strengths of the two companies to create the ultimate on-water experience. Sadly, that experience doesn’t include the Chiron’s 8.0-liter, 1,479-horsepower W16 engine, or any other Chiron mechanicals for that matter. Power comes from a typical MAN V8 marine engine offering either 1,000 or 1,200 horsepower, with propulsion provided by MJP waterjets. Combined with a four-foot draft, the Niniette 66 can operate without issue in shallow water.

There is a cool Bugatti steering wheel for the captain, but aside from the Chiron-based design, this is all Palmer Johnson. That’s just fine, because performance and luxury are part of the Bugatti experience. And this yacht certainly delivers luxury.

“The challenge was to create an experience and a persona as much as a yacht, from streamlined luxury, sophisticated style, and unprecedented quality. For owners of tomorrow, Niniette will lift your expectations of life even higher,” said Palmer Johnson CEO Timur in a press release. To that end, the open deck features a lower section with a combined Jacuzzi, sun pad, and champagne bar with two “social areas” on the side. There’s also a fire pit between the Jacuzzi and forward seats, something you’ll likely never see on the Chiron.

Accommodations below deck include a spacious salon with an adjacent master cabin. Of course, everything is either made with exquisite leather, aluminum, carbon fiber, polished wood, marble (yes, marble), and you’ll find plenty of Bugatti branding. Amalgam's 1:12 scale Chiron would be right at home in such surroundings.

The innovative exterior design features a slender center hull with two sponsons that aid in stability and roll dampening, even at high speeds. And if 66 feet doesn't quite fit your lifestyle, this is just the first in a series of new Palmer Johnson yachts that will range from 50 to 80 feet.

How much does the Niniette 66 cost? More than you can afford, Ferrari boy. Actually, we don’t know the specific cost, but we’re fairly certain it involves many zeroes. Then again, if you already own a Chiron and yearn to have the matching yacht, the cost probably doesn’t matter anyway.

DESIGNING THE INCOMPARABLE: BUGATTI AUTOMOBILES AND PALMER JOHNSON LAUNCH A PERFECT MATCH FOR THE BUGATTI CHIRON

FOR IMMEDIATE RELEASE
The makers of the world’s most powerful, fastest, most exclusive and
luxurious production super sports car, Bugatti, and the world’s most
innovative motor yacht builder, Palmer Johnson, announce the release of the
Bugatti Niniette 66. This will be the first in a new series of yachts, starting
from 50ft, up to 80ft.

The iconic companies have combined their pedigree in design, technology
and performance into a fearless vision of the future of sport yachts. Inspired
by the amazing Bugatti Chiron, the outcome of this powerful alchemy
between Palmer Johnson and Bugatti is the limited edition Bugatti Niniette
66.

Makers of the fastest car in the world today, Bugatti was once a boat builder
too. Commissioned to create a one-of-a kind speedboat in 1930 by Prince
Carlo Maurizio Ruspoldi, founder Ettore Bugatti named this low on the water
beauty the Niniette – the family pet name of his youngest daughter Lidia.

A shared DNA
A common vision of the future has made this dream a reality. Palmer
Johnson’s history of building the world’s most groundbreaking yachts has
been combined with Bugatti’s signature engineering traits such as the
accentuated centre line, perfect symmetry and a sweeping signature curve.
PJ traits such as using advanced materials like carbon and a revolutionary hull
have been incorporated seamlessly into this yacht design that is quite simply
like no other.

An evolved design
When Bugatti and Palmer Johnson met the first time with the idea of a joint
project in early 2015, the goal was clear from the outset: to create an
innovative sport yacht based on the proprietary strengths of the two
companies, while echoing the unmistakable design DNA of Bugatti. After first
renderings of the yacht had been presented in late 2015, a large number of
potential buyers – among them several current Bugatti owners – expressed
great interest in the project. However, they wished for a closer connection of
the yacht to the latest supercar from Bugatti, the Chiron, after its world
premiere in March 2016. Consequently, the designers and engineers went
back to their drawing boards to eventually launch the highly anticipated
Bugatti Niniette 66.

A modern masterpiece
The Bugatti Niniette is an inspired and daring design that evolves from the
Chiron. The purity of design and perfect proportions of the Niniette create
and leave an impression of magical beauty. “The challenge was to create an
experience and a persona as much as a yacht, from streamlined luxury,
sophisticated style and unprecedented quality. For owners of tomorrow,
Niniette will lift your expectations of life even higher,” explains Timur
Mohamed, CEO of Palmer Johnson.

The 20-metre-long yacht features Palmer Johnson’s innovative hull design
combining a slender main hull with two sponsons left and right that have a
positive effect on stability and roll dampening even at high speeds. “This
construction also allows for a wider build compared to other yachts in this
class, thus offering the experience of a much larger yacht,” adds Mohamed.
The extensive use of carbon fibre also adds to the yacht’s structural rigidity,
while at the same time reducing weight and increasing efficiency.

“The Niniette is a genuine member of the Bugatti family,” explains Etienne
Salomé, Design Director at Bugatti. With its accentuated centre line and the
duotone colour split of the exterior, it encompasses key elements of Bugatti’s
heritage. True to the company’s guiding design principle of ‘form follows
performance’, the clear lines and dynamic stance of the yacht in combination
with the characteristic, Bugatti signature line fused into the side profile of the
boat are a reference to the recently launched Chiron. “Even from a large
distance when entering a port, the Niniette will always be recognized as a
true Bugatti,” says Salomé.

The yacht features a spacious open deck that reflects Bugatti’s focus on
outstanding craftsmanship and authentic materiality, with carbon fibre, finest
leather and naturally blue morta oak wood as the dominating elements. The
lower part of the deck houses a combined Jacuzzi, sun pad and champagne
bar in the middle, flanked by two social areas on the side. Maritime
connoisseurs will also cherish the fire pit, centrally located between the
Jacuzzi and the two forward seats that will undoubtedly be a main attraction
for every visitor.

A precious sanctuary
The spectacularly designed exterior is complemented by a sumptuous
interior below deck. Contrary to the common interior layout with several
small cabins found in most conventional motor yachts, the salon of the
Niniette is a very spacious environment offering the highest level of comfort
for its passengers. Only the finest materials – polished metal, carbon, leather
and marble, are used for furniture and decoration. Centrepiece of the interior
lounge is the large Bugatti horseshoe overlooking the generous seating area,
while natural light streams in through the macaron-shaped window in the
ceiling. Adjacent to the salon, the master suite equipped with a comfortable
double-bed offers the ideal retreat for the night. As is customary with
Bugatti, a myriad of customization options in terms of colours, materials and
finishes for both exterior and interior guarantees that every Niniette will be a
unique piece of art.

Form follows performance
As you would expect with a Palmer Johnson, an advanced stabilised hull
achieves speed with efficiency, as well as amazing comfort on board. The
super slim main hull means higher speeds with lower input power and fuel
burn. Side sponsons give additional vessel beam and hence increased
stability at rest. Reaching top speeds of 44 knots, and with a shallow draft of
0.83 metres, Bahamas friendly cruising is possible for the weekend. Unique
Bugatti designed helm chairs and a futuristic command centre with
interactive infotainment system for vessel navigation, monitoring, control and
entertainment further enhance the experience.

Palmer Johnson
Since its creation by two artisan boat builders in 1918, Palmer Johnson has
had a reputation for leading in innovation. Pioneering the use of aluminium in
their sailing yachts which won every major race; building a yacht in 1979 that
was the fastest in the world for over a decade; followed by carbon fibre in the
new SuperSport series; pushing the boundaries of design and technology
have always a PJ hallmark. The Niniette is the latest expression of PJ’s
forward thinking design ethos together and uncompromised respect of
artistry and craftsmanship.

Bugatti
Bugatti Automobiles S.A.S. is the manufacturer of the world’s most powerful,
fastest, most exclusive and most luxurious production super sports car. Since
it was established in 1909, the French luxury brand has had its headquarters
at Molsheim, Alsace, where 450 Veyrons were produced from 2005 to 2015
and where the new Chiron, which is limited to 500 cars, is being hand-crafted
today. The brand, which has been part of the Volkswagen Group since 1998,
employs almost 300 people. With 34 dealers and service partners in 17
countries in Europe, North America and the Middle and Asia/Pacific, Bugatti
is now a global player.