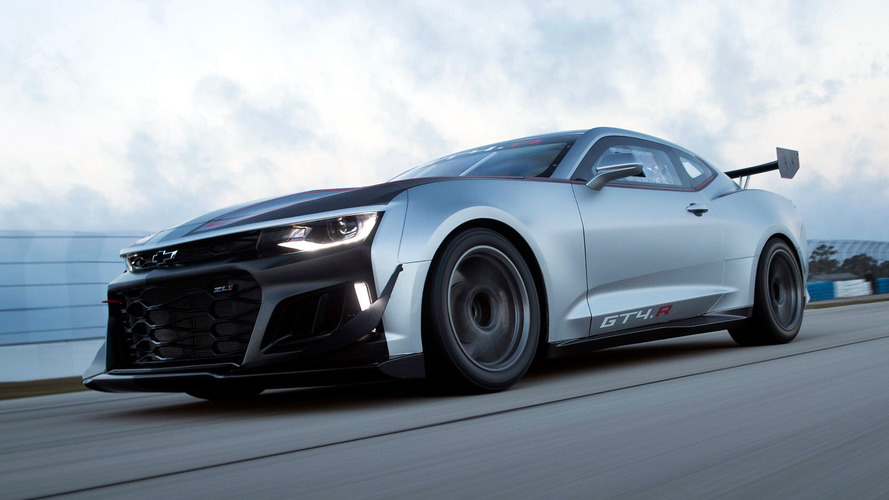 Chevrolet is dressing up the Camaro ZL1 1LE in a racing suit.

It was only a couple of weeks ago when Chevy introduced the meanest Camaro of them all — the ZL1 fitted with the 1LE package — and now the bowtie emblem has found a way to make it more intense. Meet the track-only GT4.R, a thoroughbred race car ready to make its debut on a track at the Pirelli World Challenge this weekend in St. Petersburg, Florida. It will take part in the GTS class and it’s also going to participate in the Grand Sport class of the Continental Tire SportsCar Challenge beginning with May at the Circuit of The Americas.

The GT4 fighter had to go through several changes during its transition from a road-going model to a race car. The most obvious modification is the newly developed aerodynamic package to make sure the vehicle will remain glued to the road at all times while being pushed hard on a track. For the very same reason, the massive wing at the back is substantially bigger than that of the street-legal car.

Power comes from a race-spec version of the naturally aspirated 6.2-liter V8 engine from the Camaro SS hooked up to an Xtrac six-speed sequential gearbox. It also gets an Xtrac racing limited slip differential, uprated Brembo brakes, and a set of Öhlins coilovers.

Ahead of its racing debut this weekend, you can briefly hear the angry soundtrack provided by the race-prepped V8:

As for the street-legal Camaro ZL1 equipped with the 1LE package, it’s bound to go on sale later this year as a 2018MY. Pricing details have not been disclosed, but surely the new track toys will command a premium over the standard ZL1 version available for the 2017MY from $61,140 MSRP. Chevy says it will be well worth the extra money taking into account the 1LE-fitted model will slash three seconds from the Camaro ZL1’s time around the Milford Road Course track. You can imagine the GT4-spec race car is even faster.