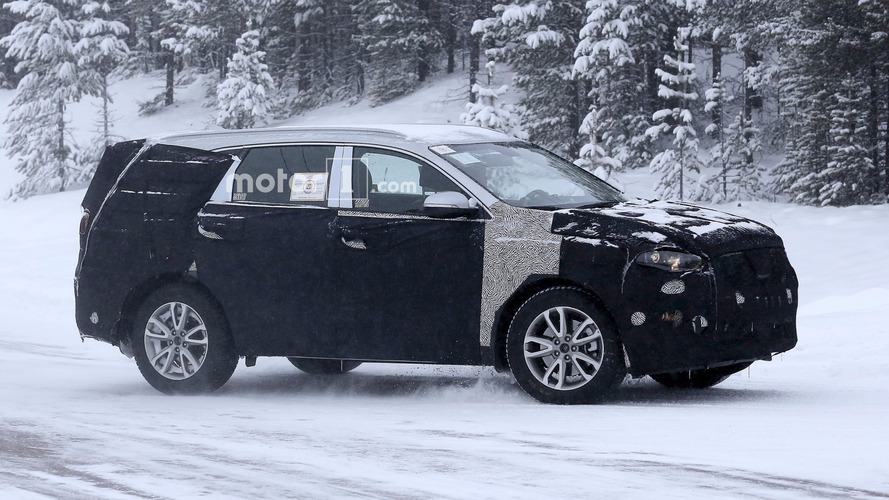 The LIV-2 concept will morph into a production model by the end of the year.

[Update] Apparently, this is not the next generation Ssangyong Rexton. It turns out these spy photos show a prototype of the Kia Sorento, which is slated to receive a facelift later this year. It's quite surprising that the South Korean manufacturer is using such a heavy camouflage for what appears to be only a slight refresh, but the disguise is hiding restyled headlights and a revised radiator grille. The shape of the LED daytime running lights could also be redesigned. While no mechanical upgrades are reported so far, the model could receive an engine lineup optimized for better efficiency and performance.

Ssangyong has updated its flagship SUV model, the Rexton, several times in the last few years. In its latest form, the car is powered by a 2.0-liter gasoline and a 2.2-liter turbodiesel engines, which can be mated to a six-speed manual or a Mercedes-Benz-sourced seven-speed automatic transmission. But soon, the current vehicle will get a well-deserved retirement, as a brand new generation is under development.

As seen in these first spy shots of the new Rexton, it will be slightly bigger than its predecessor and will be heavily influenced by the LIV-2 SUV concept that was revealed at the 2016 Paris Motor Show. In its transition from a study to a production model, the car will lose some of the concept's more radical features, like the super sleek LED headlights and the overly aggressive front and rear diffusers. However, the overall shape will be retained and even the slightly sloped roofline will be featured in the production model.

Word on the street says the engine lineup will be carried over and optimized. Expect to see the same 2.0-liter gas unit, as well as retuned 2.2-liter diesel, based on a smaller 2.0 diesel. This motor will generate close to 180 horsepower (134 kilowatts) and 295 pound-feet (400 Newton meters) of torque, which will be channeled to all four wheels through an optimized automatic transmission.

Aimed at the Hyundai Santa Fe, Kia Sorento and the likes, but wearing a more affordable price, the new Rexton will benefit from an array of safety and assist technologies. The package will include autonomous braking and lane departure warning systems, as well as a 360-degree parking camera. These will be added to the heated seats, satellite navigation, and parking sensors, already optionally available for the current model.

Interestingly, Ssangyong might be also working on a crew cab pickup version of the Rexton with two bed lengths and two wheelbase options planned. Details on this project are scarce, but the South Korean company will most likely offer its truck with a locking differential and a selectable four-wheel-drive system.

The new Rexton will arrive before the end of the year and will hit the market as a 2018 model.