Another Round of 2011 Porsche Cayenne Spy Photos 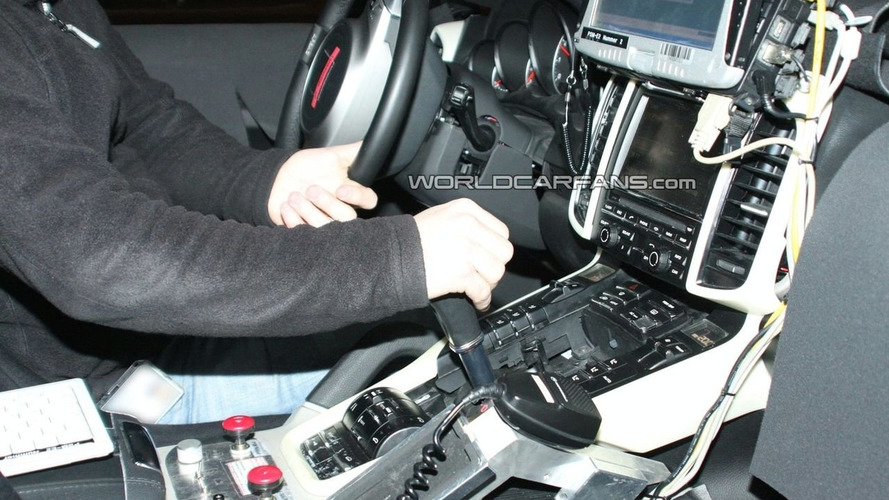 Porsche’s upcoming 2011 Cayenne has once again been spotted prowling the streets and this time we can bring you interior pictures that show a cabin vertically identical to the new Panamera sedan.

Porsche's upcoming 2011 Cayenne has once again been spotted prowling the streets and this time we can bring you a better interior picture that shows a cabin virtually identical to the new Panamera hatchback.

Judging by the official photos of the Panamera interior that were released earlier this week, we can expect the new Cayenne to offer a luxurious cabin that features high quality materials and a vastly improved design. The center console is dominated by a shifter which is flanked on both sides by rows of buttons which control everything from the heated seats to the climate control. Above the center console resides a large LCD display which is used for navigation and audio controls. As with any Porsche, a long list of optional equipment will be available.

Power for the new sport-ute should come from a variety of petrol, diesel and hybrid engines. On the petrol side, we can expect the new 2011 Cayenne S to come with the Panamera's 4.8-liter V8 engine that develops 400 bhp (294 kW). Likewise the new Cayenne Turbo will be powered by the 4.8-liter biturbo V8 engine from the Panamera Turbo that cranks out 500 bhp. Diesel power should come from Volkswagen's V6 turbo diesel engine which produces 240 hp (176 kW) and 550 Nm of torque. Little is known about the hybrid version but expect it to offer a 15-25% increase in fuel economy compared to petrol models.

Gallery: Another Round of 2011 Porsche Cayenne Spy Photos