Jaguar I-Pace Concept is red and ready for Euro debut 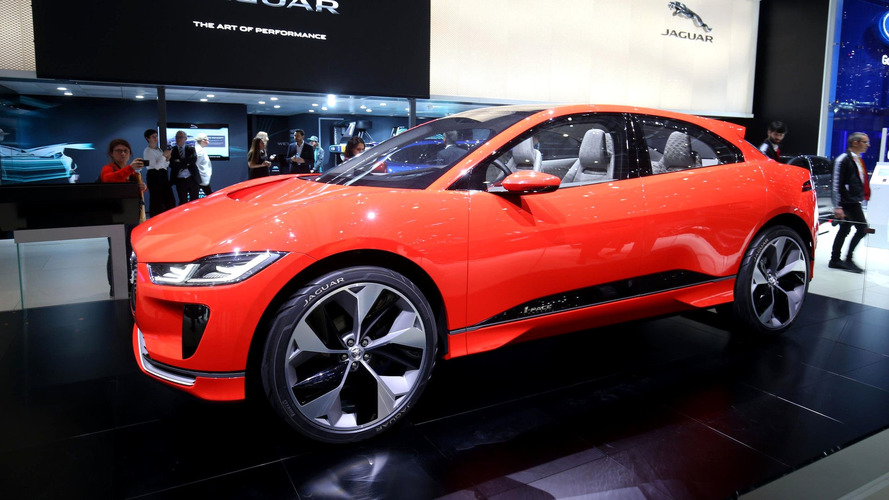 It has AWD and 400 horsepower with a range of over 300 miles; production version due next year.

Stare too long at Jaguar’s I-Pace Concept and you could suffer permanent retina damage. Perhaps not permanent, but there’s certainly no conceivable way to miss it among the metal on display in Geneva. The color is appropriately called Photon Red, because of course the I-Pace Concept is Jaguar’s first fully electric vehicle. Dual compact motors at each axle drive all four wheels, powered by a liquid-cooled, 90 kilowatt-hour battery pack that can be charged via 50kW DC charging station in just over two hours.

Fully juiced, the I-Pace Concept makes a total of 400 horsepower with 516 pound-feet of instant electric torque, which according to Jaguar is enough to send this crossover SUV to 60 miles per hour in the four-second range. Such antics will drain the battery quicker, but normal driving should see the I-Pace Concept run more than 310 miles between charge stops.

This is a very important vehicle for Jaguar, and not just because it’s the manufacturer’s first all-electric effort. A production version of the concept is already in the works, slated to be unveiled later this year with deliveries beginning in 2018. Geneva marks the concept’s first official appearance on the European show circuit after a strong showing stateside following its November 2016 debut. That’s a fairly abbreviated concept-to-reality time frame for normal cars, never mind a foray into uncharted territory.

There’s little question that Tesla’s success in the electric field is a motivating factor behind the I-Pace, not just in terms of range and performance but also in development time. The concept matches up with the Model X on many fronts, and depending on pricing, could even bite into Tesla's sedan market share.

As the I-Pace continues to make the auto show rounds we’ll be very interested to see if the production version remains on schedule, and if so, how it will differ from the slick concept we see now.

The I-PACE Concept car is the start of a new era for Jaguar, previewing the brand’s first-ever electric vehicle. This is a production preview of the Jaguar I-PACE, which will be on the road in 2018.

Jaguar’s engineering and design teams have torn up the rule book to create a bespoke electric architecture, matched with dramatic design. The result is a no-compromise smart, five seat sports car and a performance SUV in one.

Ian Callum, Jaguar Director of Design, said: “The I-PACE Concept is a radical departure for electric vehicles. It represents the next generation of battery electric vehicle design. It’s a dramatic, future-facing design – the product of authentic Jaguar DNA matched with beautiful, premium details and British craftsmanship.

“This isn’t just a concept. It is a preview of a five-seat production car that will be on the road in 2018. This will be Jaguar’s first-ever battery-powered electric vehicle and opens a new chapter in the history of our legendary brand.”