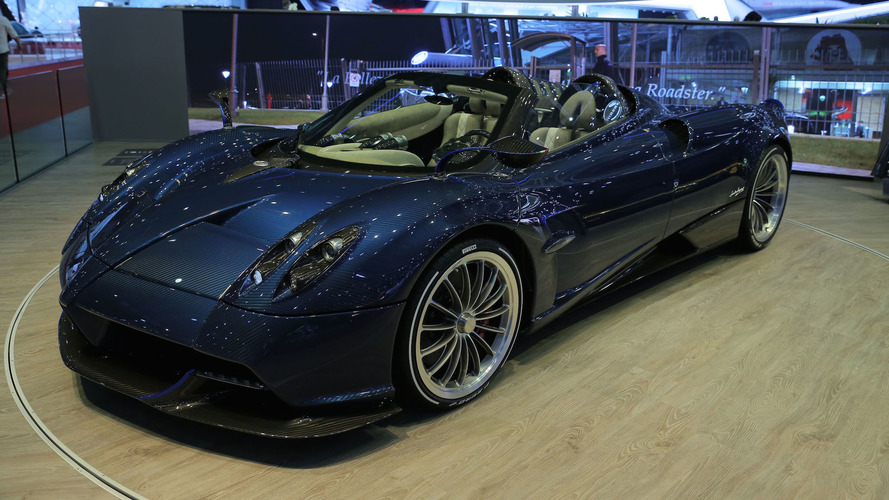 Despite not having a roof, the new version has more power and less weight than the coupe.

Pagani admitted to the Huayra Roadster’s development way back in 2014, but it has taken until the 2017 Geneva Motor Show for the open-roof hypercar finally to make a debut. After such a long wait, the topless model doesn’t disappoint.

Horatio Pagani’s team did far more than just saw off the top of the existing Huayra coupe. A revised front fascia gives the face a sharper look. Removing the roof, lets the designers sculpt gilled nacelles behind each of the seats. A removable panel lets occupants add some protection over their heads if it starts to rain during a drive. A separate carbon fiber unit provides a little more style by including a transparent piece in the middle.

Mercedes-AMG’s biturbo V12 makes 752 horsepower (561 kilowatts) and 738 pound-feet (1,000 Newton-meters) of torque in the roadster. Those are healthy upgrades over the standard coupe that makes 719 hp (536 kW) and 738 lb-ft (1,000 Nm). The droptop continues to use a seven-speed gearbox. The convertible’s specs still leave Pagani room to introduce a more hardcore BC version with 789 hp (588 kW) at some point in the future.

Generally, convertibles weigh more than their coupe counterparts because of the extra bracing necessary to retain chassis stiffness without a roof. Pagani manages to avoid adding any pounds, and the company is actually able to shed 176 pounds (80 kilograms), which makes it tip the scales at 2,821 pounds (1,280 kilograms).

Pagani is building just 100 units of the Huayra Roadster, and they cost around $2.4 million (2.28 million euros) each. It’s too late to buy one, though. Pagani has been showing the convertible to potential customers since at least Monterey Car Week in 2016, and the company already reserved clients for the whole run.