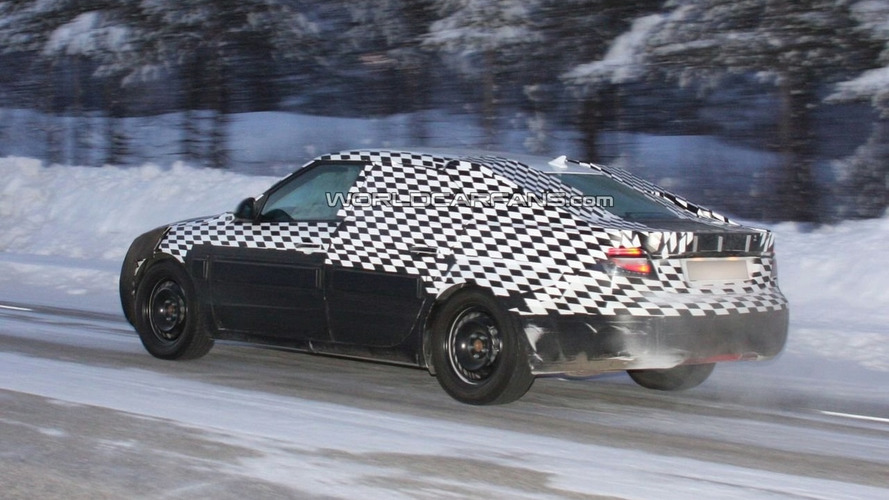 Next generation Saab 9-5 will have a longer wheelbase by 14 centimeters. The car will also be taller and larger to compete in this segment against the likes of the Volvo S80 and the Mercedes-Benz E-Class.

Here we have some more spy shots of the next-generation Saab 9-5 model. The camouflage is heavy and it's hard to tell where the car is going design-wise. But the main cues can be spotted, such as the sloping rear roofline which give this car more of a coupe look than the currently more upright 9-5.

But it has been reported that the 9-5 will be a taller and longer car than its current incarnation. So that sloping roofline doesn't necessarily mean less headroom for taller drivers and passengers. The car is also said to be gaining weight. An obvious result of its growth in dimensions as the wheelbase will be extended by a substantial 14 centimeters. This will make the 9-5 more competitive in its segment as it goes up against the likes of the Volvo S80, the E-Class Mercedes, BMW 5-Series and the Audi A6.

Previous spy shots revealed a prototype 9-5 fitted with a 2.0-liter turbocharged petrol engine with 210 hp. Also available for the future 9-5 will likely be a 2.8-liter V6 as well as a 3.6-liter V6 from GM for the US market version - an engine found in the current Buick Lacrosse.

A diesel is also expected as is a hybrid version but no solid details on those are available from GM quite yet.

The next generation Saab 9-5 is scheduled to take its first public bow at the Frankfurt motor show this September.