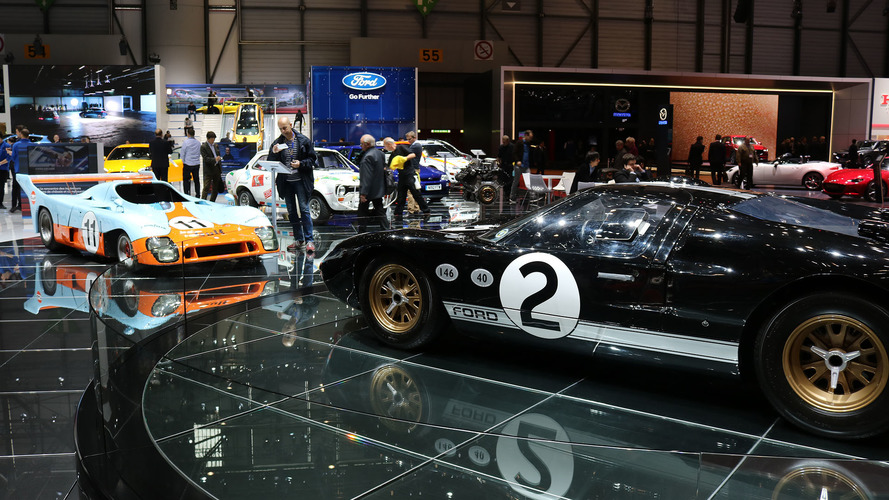 Escorts, Fiestas, and more highlight the brand’s racing past.

The new Fiesta ST hot hatch and the GT supercar are the stars of the Ford display at the 2017 Geneva Motor Show. They’re not the only part of Ford’s performance-car history, though, as evidenced by the classic race cars on display here. Here’s a quick look at the cars and what they tell us about the heritage of fast Fords.

Based on the first-generation Focus hatchback, this rally car (called the S9 FMC) was built for legendary driver Colin McRae to enter in the 1999 Safari Rally. McRae won, helping put Ford back on the map in the rallying world. Evident on this car are a raised suspension, an air intake mounted atop the roof, bash guards, and a stripped interior fitted with all the safety gear required for rally racing. This car’s history, by the way, also includes a great footnote. It was the first World Rally Car raced by a woman, when Penny Mallory entered the car in Britain’s Network Q rally.

This road-going version of the Cosworth RS, which was used in rallying from 1990 through 1994, packs a 2.0-liter turbocharged inline-four engine good for 227 horsepower ­– down significantly from the 400 hp offered in the race version, but still a ton of power for this car’s era. Able to run to 62 miles per hour in 6.1 seconds (quicker than the new Fiesta ST) and with a top speed of 140 mph, the Cosworth RS was a serious machine. And that’s before you notice it enormous, dual-level rear wing.

What started life as a 1967 Escort 1300 Mk1 was converted to a 140-hp, 1.8-liter rally car in 1993. It campaigned in the London-Sydney rally and a year later was rebuilt to make 200 hp in anticipation of the 1995 London-Mexico rally. This car’s classic livery and graphics, along with its extra body protection, giant lights, and teensy wheels with off-road tires, make it a real gem on the show floor.

This original GT40 was built as a race-prepared car, with a 4.7-liter V8 engine and five-speed manual transmission. It’s got a top speed of 197 mph and has been painted in various different liveries over the years. It was most recently repainted this black-and-silver scheme in 2006 to celebrate the 40th anniversary of the Ford GT’s 1-2-3 win at Le Mans in 1966.

Introduced in 1984, the Ford Fiesta XR2 packed a 96-hp 1.6-liter single-cam inline-four engine, as well as widened bodywork, upgraded brakes, a stiffer suspension, and a five-speed manual transmission. In 1989, the XR2i debuted with a more powerful twin-cam engine, while the even spicier Fiesta RS Turbo made its debut at the 1990 Turin Motor Show.