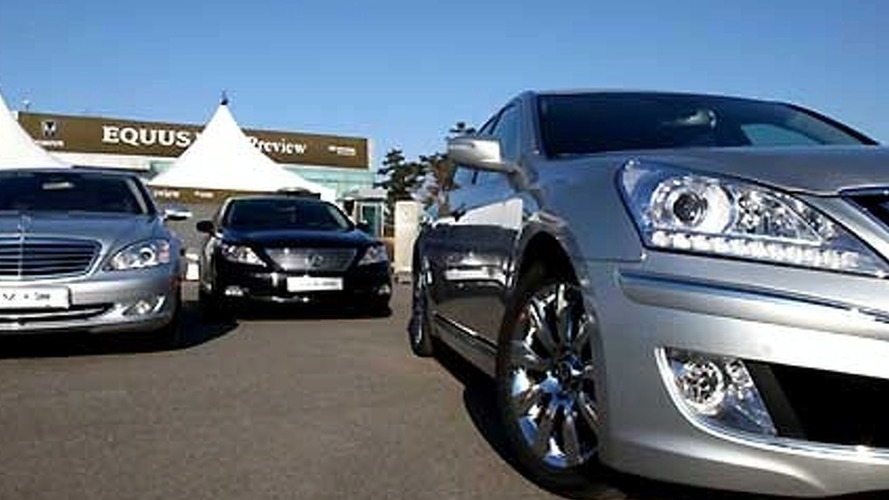 We get a first look at the new Hyundai Equus, just a few weeks before its alleged unveiling at Geneva.

The new Hyundai Equus has been unveiled in advance of its Geneva release. Hyundai showed off the Equus to several dozen journalists, releasing a few photos to boot.

Hyundai's luxury sedan hit the market in the late 1990s as a Mitsubishi-designed executive vehicle, that was also sold in Korea as a limo. It was not a worldwide vehicle, having been sold mainly in Korea, parts of the Middle East, and China, with a few exported to Europe. The vehicle received a facelift in 2003.

The new generation Equus has two engine choices, including a 3.8-liter V6 and a 366 horsepower 4.6-liter V8. At the event, they compared the power figures with the Lexus LS460L and the Mercedes-Benz S350L. Brimming with confidence, they even let journalists test drive all three cars at their own event, just to demonstrate the Equus' abilities to compete with more established luxury sedans. Some of the available equipment will include LED-lined headlights, oversized fog lights, dual exhaust, lane assist, a new computer system that analyzes data from the entire chassis, and pre-crash seatbelts.

The new Hyundai Equus will now have a further reach, likely getting a U.S. launch as the Genesis Prestige. It is expected to receive the attention of the worldwide media at the Geneva Motor Show. At the same time, it goes on sale in Korean dealerships as of 3 March.