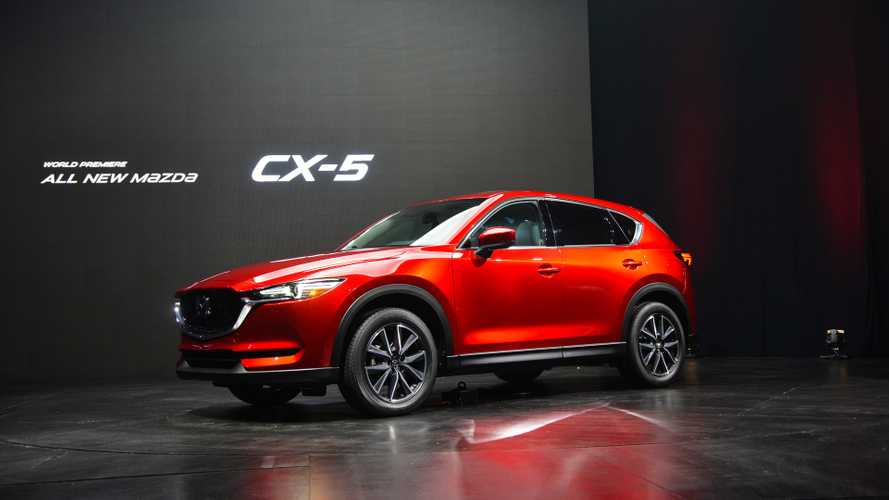 Mazda's upgraded CX-5 costs a little more than last year but comes with a lot more standard tech. The diesel arrives later in 2017

Production of the 2017 Mazda CX-5 is already underway in Japan, and the new crossover begins arriving in late March at dealers in the United States. Now, Mazda is announcing that the middle child in its American CUV lineup has a starting price of $24,985 (after $940 destination).

At launch, the CX-5 is exclusively available with a 2.5-liter four-cylinder and six-speed automatic gearbox – a manual transmission is no longer available. The mil pumps out 187 horsepower (139 kilowatts) and 185 pound-feet (251 Newton-meters) of torque. The available Sport, Touring, and Grand Touring trims are available with front- or all-wheel drive as a $1,300 option. Mazda’s long-promised 2.2-liter diesel four-cylinder arrives in the latter half of the year, and the automaker plans to announce more details about the powerplant closer to launch.

The Sport trim of the 2016.5 CX-5 with an automatic gearbox started at $24,495 (after $900 destination). However, the 2017 example makes up for some of the $490 difference with the inclusion of new standard features like full LED headlights, Smart City Brake Support, which slows the CUV between 2 and 19 miles per hour (3 to 31 kilometers per hour)for preventing a collision, G-Vectoring Control, which adjusts engine torque for improved steering stability when cornering, and a reclining second-row seat.

Starting at $26,855, the Touring trim has new amenities, including dual-zone climate control, air conditioning vents for the second-row, and USB ports for folks siting in the back, too. Rather than the Sport version’s cloth seats, this model comes with leatherette upholstery with Lux Suede inserts. The front chairs are also heated, and the driver has six-way power adjustment.

The Grand Touring trim for $30,335 is the range topping CX-5 and starts where a fully optioned Touring model leaves off. New features for 2017 include adaptive front lights, upgraded headlights with LED signature lamps, LED foglights, and LED taillights. It rides on 19-inch wheels, instead of 17-inch units from the other versions, and features a leather interior. The driver has eight-way power controls over his or her seat, including lumbar adjustment.

For customers who need even more toys to play with, there’s an optional Grand Touring Premium Package for this trim that adds $1,830 to model’s price. It adds two-position memory for the driver’s seat, a six-way power adjustable passenger seat, a head-up display with traffic sign recognition, heated steering wheel, heated rear seats, and a windshield de-icer.

In addition to all of these options, buyers can add the three-layer Soul Red Crystal paint to any trim for $595. Alternatively, the Snow Flake Pearl Mica shade costs $200 extra on any model. Customers getting a Touring or Grand Touring version of the CX-5 can buy the crossover in Machine Gray Metallic for $300.

We look forward to getting behind the wheel of the 2017 CX-5 soon for a chance to see how the new equipment feels on the road.