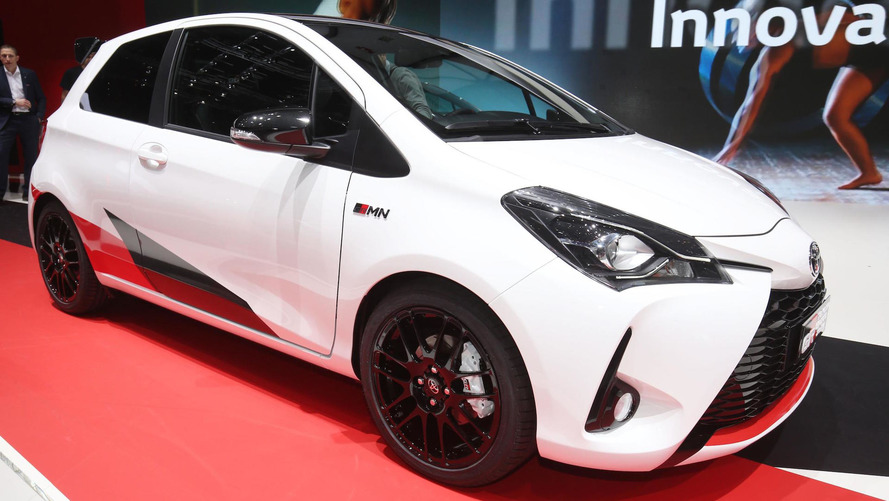 It comes with 205 horsepower and a six-speed manual.

This is not a normal Toyota Yaris. This is a 205-horsepower (152-kilowatt) hot hatch with World Rally Championship credentials and some of the best performance in its class. We first caught wind of it back in February, but now it’s finally here in the flesh, making its debut at the Geneva Motor Show.

The Yaris GRMN takes the standard hatchback formula and turns the dial to 11. With a bit of help from Gazoo Racing, the 1.8-liter engine has been supercharged to produce the aforementioned 205 hp (152 kW), sending power to the front wheels exclusively via a six-speed manual transmission.

Toyota says that with the additional power upgrade, the Yaris GRMN exhibits both a "best-in-class" 0 to 62 mile-per-hour (0 to 100 kilometer-per-hour) time and acceleration from 50 to 75 mph (80 to 120 kmh) in fourth gear. Though, no official numbers have been given.

The chassis also received a much-needed makeover to cope with all that added oomph. Additional bracing, including an extra bar between the front and rear suspension towers, was added. Making sure it was up to Gazoo standards, the upgraded suspension unit was tested extensively on the Nurburgring, of course.

Offered in three-door trim only, the Yaris GRMN also features a few exterior upgrades that separate it from the standard supermini. A set of 17-inch BBS multi-spoke black alloy wheels pair with a black wing spoiler, and custom graphics on the doors and side sills. Not to mention a sporty cabin filled with leather, red stitching, and bucket seats.

Toyota doesn’t say how much its hotted-up hatch will cost or when it will even go on sale, but you can catch it on display at the Geneva Motor Show until then.

Toyota Yaris By TRD And Modellista

The new Yaris GRMN is more than a simple hot hatch, it is a thoroughbred performance model that directly benefits from the engineering and tuning skills Toyota is developing in its motorsport programme. Powered by a new 1.8-litre supercharged engine producing more than 205bhp, it promises speed, poise and rich driver rewards.

A full gallery of Toyota Yaris GRMN photographs can be downloaded here.

The Yaris GRMN is an authentic, full-blooded and highly tuned car, inspired and influenced by Toyota’s return to the FIA World Rally Championship (WRC) in 2017 with Toyota Gazoo Racing and the Yaris WRC after a 17-year break from the competition. The WRC is the pinnacle of the sport and is sure to provide Toyota with new challenges and opportunities to further develop its people, explore new technologies, and experience different driving conditions around the world, helping it in its pursuit of making ever-better cars.

The motorsport influence is evident in dedicated performance features that broadcast the car’s special qualities, both in its exterior styling and its driver-focused interior. It also sports a special paint finish – white with red and black flash detailing on the bonnet and sills, echoing the livery of Toyota’s WRC car.

Toyota called on its European teams to design the Yaris GRMN and develop its engine and interior, while responsibility for the chassis and braking system fell to colleagues in Japan. All production will be handled by Toyota Motor Manufacturing France at its plant in Valenciennes.

Although successful GRMN models have previously been sold in Japan, the Yaris GRMN will be the first to be marketed in Europe, on sale from early 2018.

The Yaris GRMN is unique in the European hot hatch market in being powered by a supercharged engine. This highly responsive 1.8-litre unit will produce more than 205bhp, driving the front wheels through a six-speed manual transmission and enabling best-in-class times both for the sprint from nought to 62mph and acceleration from 50 to 75mph in fourth gear.

To ensure the engine’s prodigious power is translated into a genuinely rewarding drive, the Yaris GRMN has a reinforced chassis with additional bracing, including an extra bar between the front suspension towers.

Its suspension has been tuned through extensive testing on the Nürburgring’s Nordschleife and benefits from significant input from Toyota Gazoo Racing’s motorsport activities. It features a Torsen limited-slip differential for better traction and handling. Shorter springs allow the car to hug the ground more closely and these are teamed with dedicated shock absorbers, developed with Sachs, and a larger diameter front anti-roll bar.

The Yaris GRMN’s performance credentials are clearly broadcast in its styling. Offered exclusively in three-door form, it rides on 17-inch BBS multi-spoke alloys and is fitted with a bespoke, black wing-type rear spoiler.

Its features include dedicated front and rear bumper designs, a rear diffuser and a distinctive centre exhaust tailpipe.

The cabin is equally an expression of the car’s performance focus, with front sports seats designed specifically for the car by Toyota Boshoku, providing best-in-class body holding and support.

The authentic performance details include a small-diameter, leather-wrapped steering wheel – shared with the Toyota GT86 – that incorporates a centre line mark to help the driver place the car precisely on the road. There is also an aluminium sports pedal set and a combimeter designed to reflect the car’s special performance character.