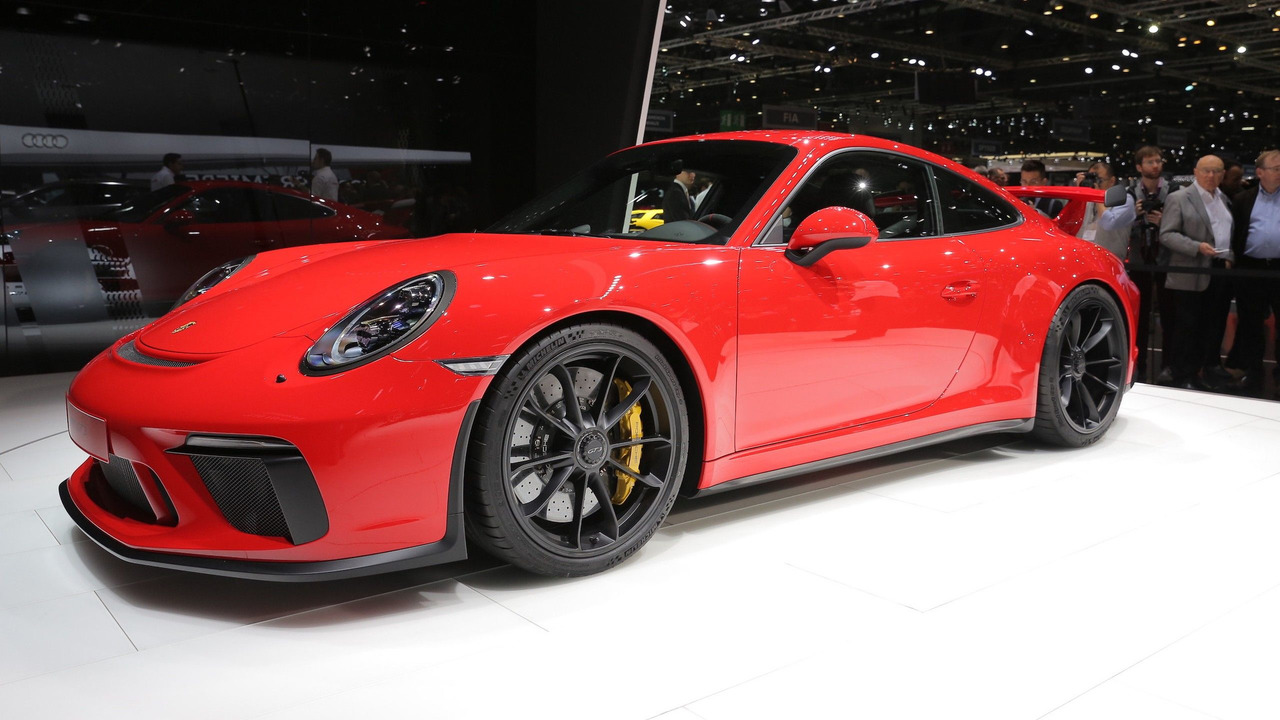 Purists rejoice! A manual is available, but the PDK is 0.6 seconds quicker in the 0-60 mph sprint.

[UPDATE] Porsche has introduced the updated 911 GT3 at the Geneva Motor Show. Press release has been attached in the appropriate section below the article.

The rumors were true, folks. Ahead of an imminent official debut at the 2017 Geneva Motor Show, the press release for the Porsche 911 GT3 facelift has emerged onto the web to reveal two important facts: engine and gearbox. The former takes the shape of a naturally aspirated 4.0-liter flat-six engine delivering 500 horsepower (373 kilowatts) and 338 pound-feet (458 Newton-meters) of torque. In a bid to please both worlds, Porsche is going to link the engine to either a seven-speed, dual-clutch gearbox or a six-speed manual. Interestingly, the PDK is being labeled as the “standard” unit and it has been specially developed for the refreshed 911 GT3.

If you’re after performance, go with the automatic transmission as it enables the car to do 0-60 mph (0-96 kph) in only 3.2 seconds whereas the manual-equipped 911 GT3 will need 3.8 seconds. Despite the 0.6-second difference, we’d still go with the model fitted with three pedals. Top speed stands at 197 miles per hour in the case of the PDK-fitted version, while the manual model can do an extra one mph.

At 3,116 pounds (1,413 kilograms), the manual model is 37 lbs (16.7 kg) lighter than its PDK counterpart and both versions come with rear-wheel steering and an updated chassis to make the 911 GT3 feel more nimble when going fast around the corners.

Images of the car are not available at this point, but Porsche says the 2018 911 GT3 facelift has an updated front fascia to optimize air flow, while at the back it boasts a new diffuser and a carbon wing to further boost aero. Some other subtle and borderline unnoticeable styling tweaks in typical Nine Eleven fashion are also expected.

The interior cabin will host a sporty steering wheel borrowed from the sold-out 918 Spyder hypercar along with optional full bucket seats with a fixed carbon fiber reinforced backrest. These lightweight seats will serve as an alternative to the standard Adaptive Sport Seats Plus boasting 18-way electric adjustment and a memory function.

Atlanta, Georgia. Porsche motorsport technology continues to be incorporated into street-legal sports cars. The new 911 GT3 was developed in Weissach,and will be manufactured on the same production line as all other 911 street and 911 GT3 Cup racecars. The centerpiece of the latest 911 GT3 is the new naturally aspirated 4.0 liter flat-six engine which produces 500 hp and 339 lb.-ft. of torque. This new, high-reving powerplant is based on the one now used in all 911 race cars, including the 911 GT3 R and 911 RSR. The redesigned chassis with Rear Axle Steering and systematic lightweight construction is specifically tuned to produce superior driving dynamics in conjunction with the naturally aspirated engine.

Fast in corners, stable on the straights: Track-bred chassis with rear axle steering
The chassis of the new 911 GT3 benefits from Porsche motorsport racing experience, and it has been tuned for improved handling and driving dynamics. The chassis and active Rear Axle Steering offer superlative handling characteristics. Depending upon the speed, the rear wheels are steered either in the opposite or the same direction as the front wheels, improving the vehicle's agility and stability. The dynamic engine mounts and the rear locking differential, both fitted as standard, also boost the car's driving dynamics.

Visually, the lightweight carbon fiber rear wing reinforces the fact that the design of the car is driven by aerodynamics. The lightweight front fascia and the front spoiler are designed for optimum airflow. The rear end with exhaust air openings and a new diffusor also contribute to the overall aerodynamic efficiency.

Interior: A control center for exceptional driving dynamics
The interior of the new 911 GT3 is designed to underscore the exciting driving experience. The GT Sport steering wheel designed with a 14.1 inch diameter was adopted from the 918 Spyder. The Sport Seats Plus feature enhanced bolsters for increased lateral support and electric adjustment of the seat back and seat height.

There are two other seat options available for the 911 GT3. The Adaptive Sport Seats Plus offer an 18-way electric adjustment along with a power steering column and seat memory. Alternatively, Full Bucket Seats with electric height adjustment and a fixed carbon fiber reinforced backrest are also available. As on all GT variants, the rear seats are omitted to save weight.

Porsche Track Precision App as standard
In addition to the Porsche Communication Management (PCM) - which includes a navigation system capable of real-time traffic information and the Connect Plus Module including Apple Car Play - the Porsche Track Precision App is also included as standard equipment. Using this app, 911 GT3 drivers can display, record, and analyze detailed driving data on a smartphone.