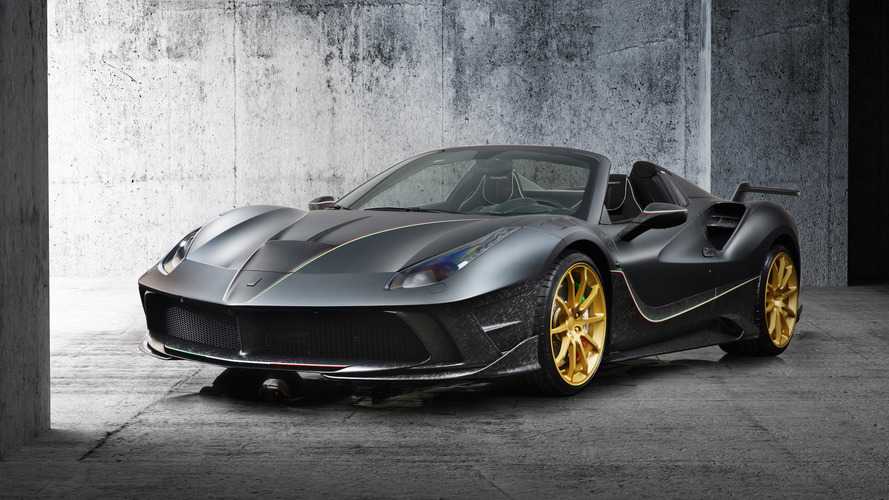 It’s the most extreme, aftermarket Ferrari you’ll see all year.

Prepare your eyes for a visual feast, Mansory is showing off its new 4XX Siracusa Spider at the Geneva Motor Show. This is it. Taking its cues from the dramatic Siracusa coupe, which we first saw more than a year ago, the open-top Spider version adds to the dramatics with even more extreme bodywork and power.

The exterior wears a redesigned body over the 488 GTB on which it’s based, naturally. The front fascia sees upgrades like a new diffuser with aggressive air inlets to give the car even better cooling, a specially designed front lip, new side skirts, carbon fiber rear-view mirror casings, and new daytime LED running lights, just to name a few.

The rear follows a similar dramatic styling scheme. The rear diffuser gains a Liquid Black carbon fiber diffuser with Italian flag colored accents, and a unique split rear spoiler with the same red, white, and green styling on top of the unique black finish. The exterior package is completed with a set of ultra-light wheels wrapped in high-performance 255/30 tires on the front, and 325/25 on the rear.

All that extra bodywork, though, comes only second to performance. The stock 3.9-liter engine has been upgraded to produce 779 horsepower (581 kilowatts) and 641 pound-feet (870 Newton-meters) of torque. From a standstill, the 4XX Spider will sprint to 62 miles per hour (100 kilometers per hour) in just 2.9 seconds and continue on to a top speed of 211 mph (341 kmh).

To cope with all that extra power, Mansory made sure to add a few upgrades to the suspension. New lowering springs reduce the ride height by 20 millimeters, and a few special classic components aid in overall performance. A sports steering wheel, a redesigned center console, and new leather fitments with accent colored stitching gives the cabin a more upscale feel. No word on pricing or availability, but assume the cost will be just as ridiculous as the package itself when it does go on sale.

The 4XX SIRACUSA SPIDER is MANSORY’s open-top version of the SIRACUSA supercar. The centre piece of this fully overhauled Ferrari 488 Spider is the spectacular bodywork design. However, the engine, wheels and interior have also been given an impressive make-over using the best manufacturing techniques. The best proof of this is the entirely redesigned body design. Visually impressive but also technologically sophisticated – striking air inlets on the new front apron modified to provide an optimal air flow into the cooling unit. Other modifications include the specially developed front lip to provide better drive and enhanced road-gripping even when pushed to the limits. There are also new and particularly bright day driving lights to increase passive safety. The car also features imposing side skirts, as well as carbon fibre rear-view mirror housing and front fender bearing the MANSORY’s signature style. Here, too, appearances and function go hand-in-hand: the new Collage Edition carbon components are not only lighter than their series equivalents; they also guide air flow towards the drive unit. To guarantee optimal air flow within the car, the new rear apron features an integrated diffusor and compact double rear spoiler. The air guidance system in the 4XX SIRACUSA SPIDER not only transfers the power of the bi-turbo eight-cylinder engine onto the road; outlet ducts above the front wheels additionally ensure that hot air does not become stuck. In addition, there are intake ducts behind the doors to ventilate the engine compartment. MANSORY also paints the cabrio’s Collage Edition carbon fibre in Liquid Black and complements this through tri-colour accents. Ultra-light wheels play their part in both in visual and performance terms. The forged lightweight metal rims combine the highest level of stability with an extremely low weight. By reducing unsprung weight, the wheels can react in a more agile way and can precisely implement every steering command even under high strain. At the front, 9x20 inch wheels support the high-performance tyres in size 255/30, while the rear wheels transfer the power of the engine onto the road using 325/25 tyres The 3.9-litre engine in the 4XX is guided by an optimised engine management system and a specially tailored exhaust system. Combined, these provide power of 790 PS (581 kW) at 8,000 RPM. Thanks to torque of 870 Nm at 3,000 RPM, this eight-cylinder can go from 0 to 100 km/h in a breath-taking 2.9 seconds (for the series car: 3.0s). The top speed of 341 km/h (series: 330 km/h) is also considerably faster than the basic model. Special chassis components have been built into the SIRACUSA to withstand the increased engine performance, which consist of four progressively wound lowering springs. These make the centre of gravity for the vehicle 20 millimetres lower than the series model. Within the interior, MANSORY has created a control centre to perfectly link functionality and comfort: the specially developed sports steering wheel with a mix of leather and carbon fibre, and the redesigned centre console control unit guarantee optimal control of the vehicle. The interior of this supercar also radiates luxury – all interior components are clothed in leather and accented using coloured stitching. 4XX logos on the seats, foot mats and door sill trims round off the refinement programme