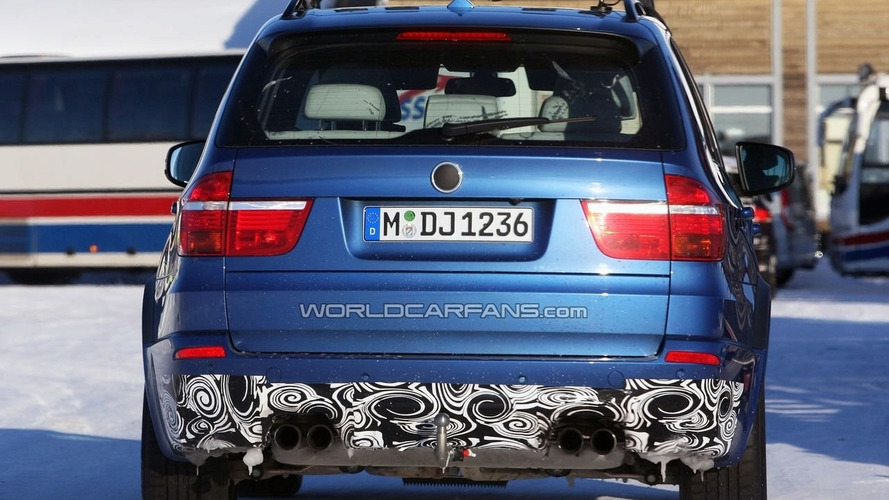 The new BMW X5 M was spied during road testing, and for the first time it wasn't black!

The BMW X5 M was caught on the road again by one of our spies. Captured during winter weather testing in the snowy north of Europe, the spy notes the "massive air intakes" seen on the sporty crossover.

So far, we have just seen this vehicle in black. Now, we can safely speculate that similar color options will be available on this line, as is available on other M vehicles. It appears to be BMW's Le Mans Blue, but sometimes lighting and shade can play tricks on a camera. Also spotted on the crossover are air vents built into the front fenders, and quad-exhaust tail pipes, as seen on other M-badged BMW vehicles. The X5 M will see a power boost, with horsepower ratings in the low-to-mid 500s. All that power has sparked two different rumors about the engine, with some saying the X5 M will get a new twin-turbo 4.4-liter V8, while others say it will receive a 507 hp 5.0-liter V10. The speculated V8 is also rumored to be the more powerful of the two choices.

BMW is building this SUV to compete with the Mercedes-Benz ML63 AMG and the Porsche Cayenne Turbo. Once released to the market, it should have customers of the two more established high performance SUV looking over their shoulders. The increase in spy photos and video seen over the last two months suggests that the BMW X5 M will make its debut at the Geneva Motor Show in March.