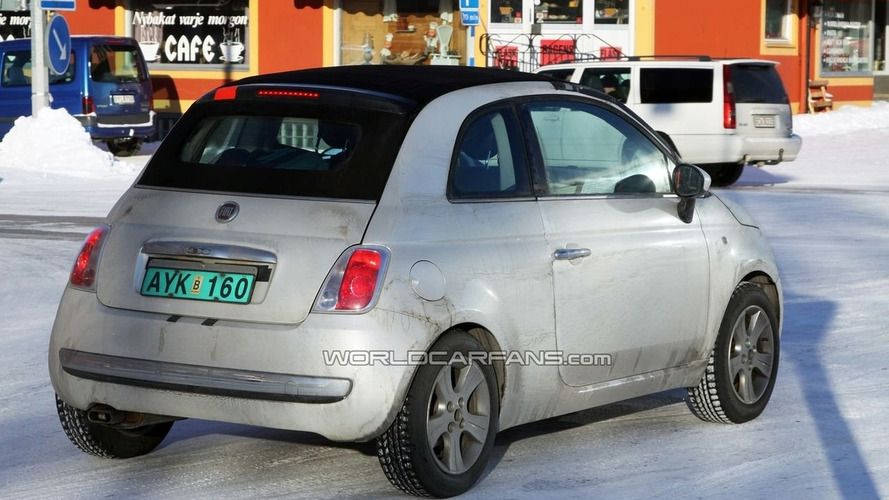 Spy pictures of the Fiat 500 Cabriolet were taken while the car covered last-minute testing kilometres in northern Sweden. As can be seen the car is completely undisguised.

So close is the official unveiling of the Fiat 500 Cabriolet that these spy pictures show the car completely naked from camouflage. It was spotted in northern Sweden with an ensemble of Fiat Group vehicles. Among them was this 500 drop-top. In just a few days the "Cinquecento" cabriolet will be officially revealed by Fiat. It's not yet known if the cabrio will be called Nuova like the original of the 1950s and 1960s.

These pictures seem to put a rubber stamp of approval on earlier speculation that only the mid-section of the roof slides backwards leaving the B and C pillars intact. The sliding part is made of canvass and should therefore not take up too much storage space.

Engines in the Fiat 500 lineup include a 1.2-litre petrol producing 69hp (51kW), a 1.3-litre diesel with 75hp (55kW) and a 1.4-litre petrol making 100hp (74kW). A 135hp (99kW) Abarth performance model using a 1.4-litre turbo engine is also part of the range. The topless Italian will probably mirror these engine choices as well although it is not understood whether the car will also carry an Abarth badge at some point.

It is now almost certainty that the Fiat 500 cabriolet will be at the Fiat stand during the Geneva Motor Show.