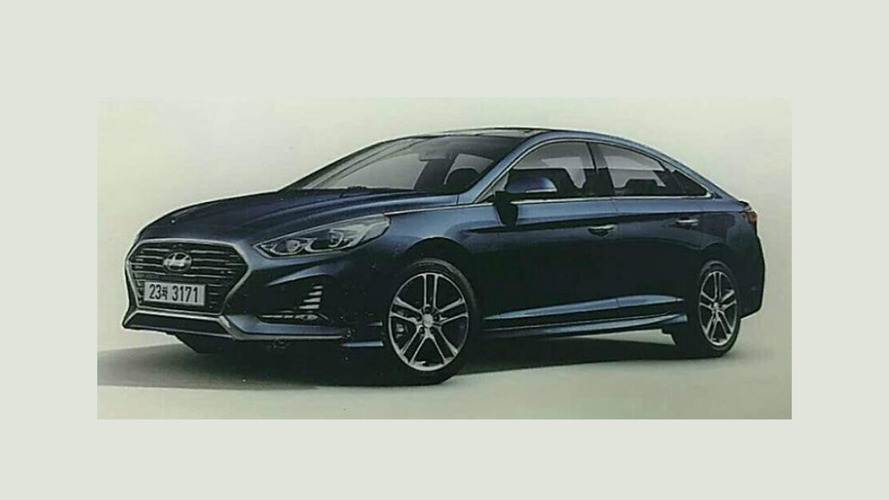 Not as exciting as the sketches, but still an improvement over the outgoing version.

It was only on Monday when Hyundai decided to tease us by publishing several sketches of the facelifted Sonata and now the cat is pretty much out of the bag thanks to a leaked official image. Bear in mind we’re looking at the standard version of the sedan, which means the powered-up Turbo model available in the United States as the Sport 2.0T is going to have an even more aggressive design.

It doesn’t come as a big surprise the exterior design is not quite on a par with the appealing teaser sketch below, but even so Hyundai has done a good job at refreshing the car depicted here in the South Korean flavor. The updated U.S.-spec model is likely slated to arrive for the 2018 model year and should carry over most of these cosmetic tweaks, including the larger front grille, reworked bumper with bigger vents, and new headlight graphics.

In addition, there seems to be a shorter strip of LED daytime running lights positioned lower on the bumper. The creases on the hood might be more prominent than before, but we will reserve our final judgment until we’ll have higher resolution images to take a better look at the front fascia. Expect some subtle changes at the back where the revised Sonata will probably have a slightly modified bumper and lightly updated taillights.

Details about whether there are any changes underneath the hood are not available at this point, but hopefully we won’t have to wait too long as the 2018 Sonata in U.S. specification might bow next month at the New York Auto Show. Perhaps Hyundai will decide to spice up the range by introducing the company's new turbocharged 2.0-liter gasoline engine with as much as 275 horsepower (205 kilowatts) as it will be the case in the i30 N hot hatch.

In its domestic market, the Sonata will likely be introduced in the weeks to come.