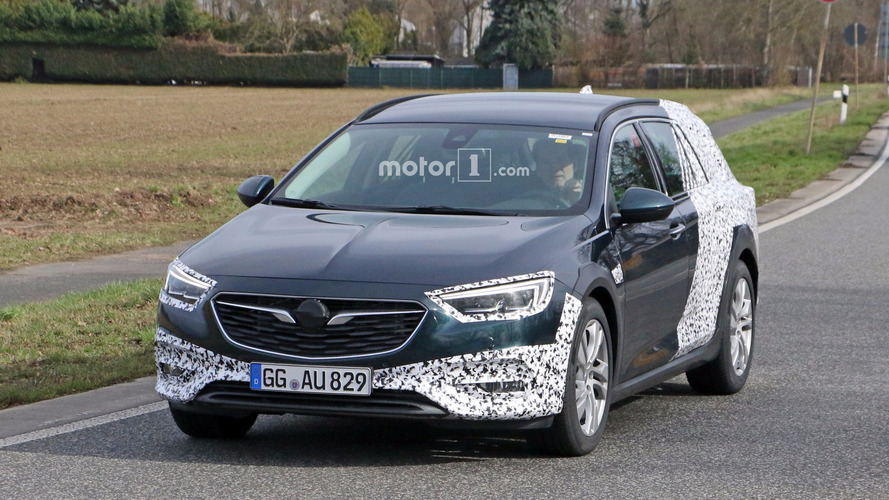 Introduced less than a month ago, the new Opel Insignia Sports Tourer has already been spotted testing on German roads in the more versatile Country Tourer version. It’s a clear sign the folks from Rüsselsheim will introduce the rugged derivative early in the midsize wagon’s life cycle to put up a good fight against the Volkswagen Passat Alltrack.

Already noticeable are some of the changes that will differentiate the Country Tourer from the regular model, such as the plastic body cladding on the wheel arches and the more generous ground clearance as a result of implementing a jacked-up suspension. In the case of the previous model, Opel’s engineers bumped the clearance by 20 millimeters (0.7 inches) over the regular wagon.

The front and rear bumpers are also going through some changes, but their designs remain concealed underneath the camouflage. Once the camo will come off, expect to see more black plastic bits and skid plates both front and rear.

While the lesser versions of the Sports Tourer will come with a front-wheel-drive layout, the more competent Country Tourer is going to feature as standard a grippy AWD setup. Opel has already revealed the new Insignia is going to make use of a GKN-developed Twinster AWD arrangement benefitting from torque vectoring capabilities. The distribution of torque will depend on three main factors: road surface, throttle position, and steering angle.

Let's remember the previous Insignia Country Tourer did receive the FWD treatment later in its life cycle, but it's too soon to say whether there will be another one. If Opel will bring it to the market, it's going to be substantially cheaper than the AWD-equipped model and will likely provide better fuel economy.

Just like the standard wagon, the new variant will have a cargo capacity of 520 liters with the rear seats in place and 1,638 liters once you fold down the 40:20:40-split rear seats. Buyers willing to spend more will be able to opt for goodies such as matrix LED headlights, head-up display, and an extensive array of safety tech.

Expect to see the new Opel Insignia Country Tourer receive its premiere at the Frankfurt Motor Show in September. Sales are programmed to kick off shortly thereafter or early 2018 at a price that will surely command a premium over the regular model given the upgrades.