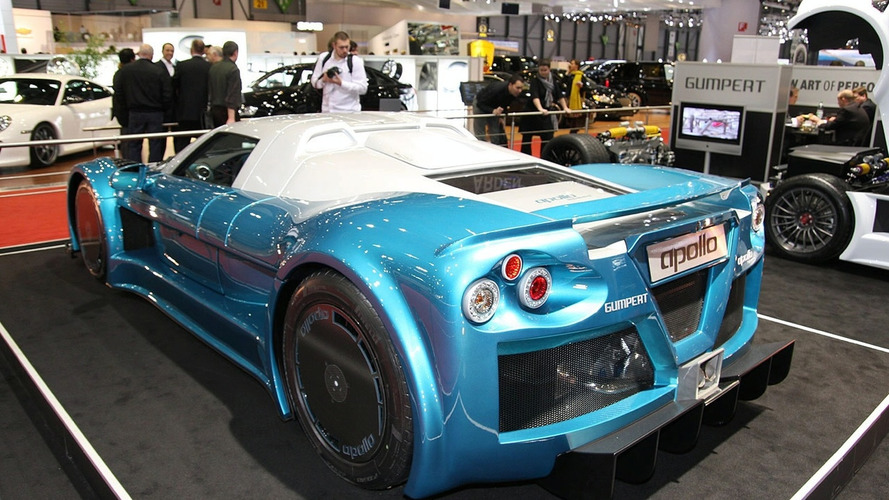 A new teaser image of the 800 hp Gumpert Apollo Speed has been released in advance of the car's Geneva debut. The Speed goes 0-200 km/h in under 9 seconds.

Full details of the Gumpert Apollo Speed plus live and press images from Geneva are now available. The German company says the racecar, whose debut is set for just a few weeks from now, is capable of a 3.0 second 0-100 km/h time.

No surprise, really, when you consider the car's power credentials. It runs on an eight-cylinder bi-turbo getting up to 800 hp and 900 Nm of torque. Amazingly, the car can hit 200 km/h in 8.9 seconds.

Looks of the vehicle have been modified from the Apollo model to make the Apollo Speed appear even more aggressive. The company claims the vehicle also takes on a "more classy" look, so hopefully they have muted the bright orange and matte black exterior used in some of their show cars. The Apollo Speed will also get a two-tone paint job meant to emphasize the reduction in the Speed's height when compared to the Apollo. It will rise to 1,105mm, about a centimeter lower than the Apollo.

Apollo claims fans will notice new wheel arches, new tail lights, and a new adjustable spoiler. Even the underbody was modified, which is now made from a carbon and aluminum sandwich (CAS). Air conditioning and a DVD player are now available as options, but why add the extra weight if you're buying a car built for speed? Customers can order an interior made from leather or Alcantara. The steering wheel is still removable, making it easier for the driver to get in and out.

The new Gumpert Apollo Speed debuts at the Geneva Motor Show on 4 March. You can read the car's full specs in the press release below.