File them away to make your car-loving friends look dumb.

A few months and several cutaways ago I said the Lamborghini Countach was the greatest supercar of all time. And now here we are, looking at David Kimble’s exquisite cutaway of the extraordinary Ferrari F40, an iconic machine that could also claim the title. Pages upon pages have been devoted to this car. Ferrari scholars have endlessly debated its intricacies. Countless enthusiasts have clamored for photos at shows. Our friends at Amalgam Collections sell an insane 1:8 scale model of the F40, with a more affordable 1/18 scale version coming soon. And F40 posters have served front-line duty in bedrooms, garages, and man-caves since the late 1980s.

The majority of those posters are staged glamor shots of the whole car, so odds are you’ve never seen the F40 portrayed quite like Kimble’s work of art. And I’m not just talking about the cutaway sections, because what we have here is actually an F40 prototype. That’s great fodder for pointing out some interesting differences between production models, but first, a little backstory on how Kimble managed to dissect a pre-production F40.

After a discussion with clients in early 1988, Kimble’s plan was to photograph a production F40 at Ferrari’s Maranello headquarters later in the year. That wasn’t ideal for his clients, however, who were hot-to-trot on a cover-worthy cutaway to scoop the competition. A solution was found with Ferrari North America, which happened to have the F40 prototype from the 1987 Tokyo Motor Show in Dearborn, Michigan for federalization studies.

Instead of traveling halfway around the world, Kimble and photographer Neil Nissing slipped over to Fiat’s emissions lab in the shadow of Detroit, where engineers were willing – within reason – to remove parts for the all-important photo shoot. Tearing apart the F40’s gearbox and 2.9-liter biturbo V8 fell outside that realm of reason, but they were based on the 288 GTO, a car Kimble had already shot and sketched. So when you look at the cutaway mechanicals under the rear engine cover, you’re seeing the proper F40 intake and exhaust infused with DNA from the 288 GTO.

Interestingly enough, within reason did include fabricating a custom lug nut socket to remove the wheels. More on that in a bit. 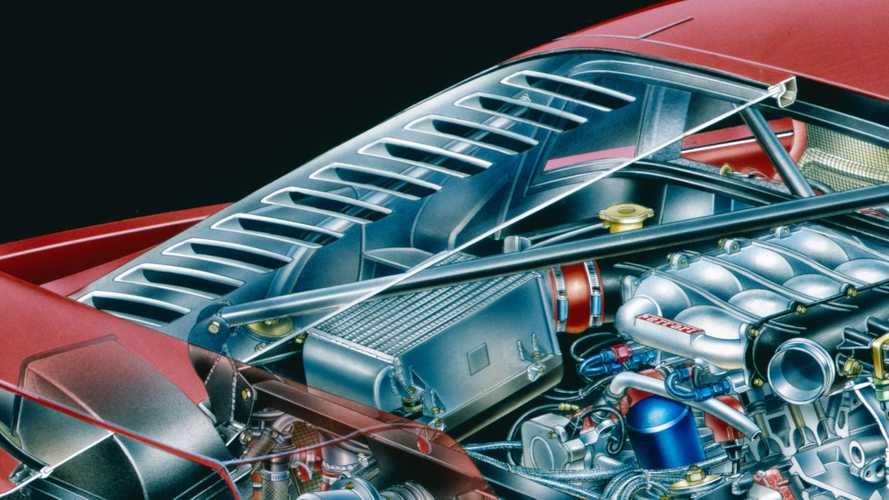 The prototype pictured here has 20 louvers on the engine cover – 10 per side. On production F40s there are 5 louvers per side with a single louver down low in middle, for a total of 11.

This one is easily missed, even if you have prototype and production photos side-by-side. The prototype has 5 gills, but Ferrari dropped it back to 4 for production cars. 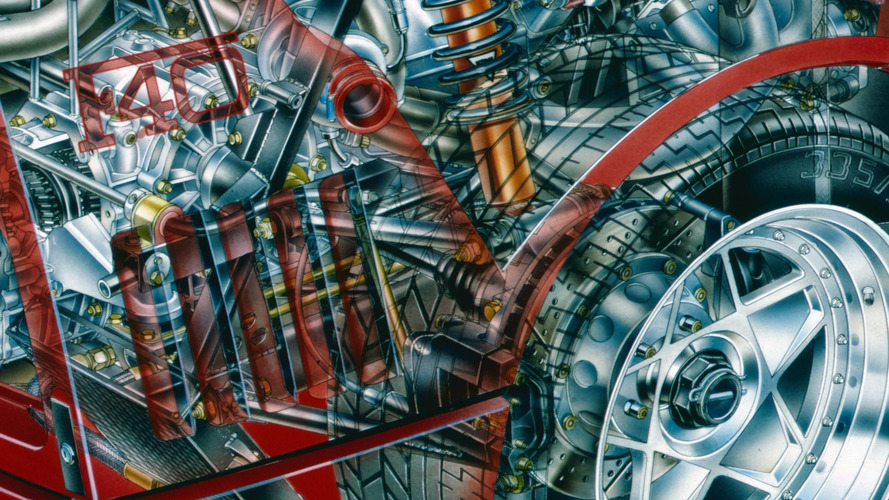 This feature is actually the same on all F40s, but few people outside the Ferrari realm know the single, center lug nut isn’t a standard hex design, but an octagon. David Kimble and the engineers helping him discovered this the hard way when the large socket they had didn’t fit the nut. A custom socket was quickly fabricated, but with the prototype wheel lug being torqued to a full 1,700 pound-feet (production cars only require 470 pound-feet) it was still all-hands-on-deck to pull the wheels. 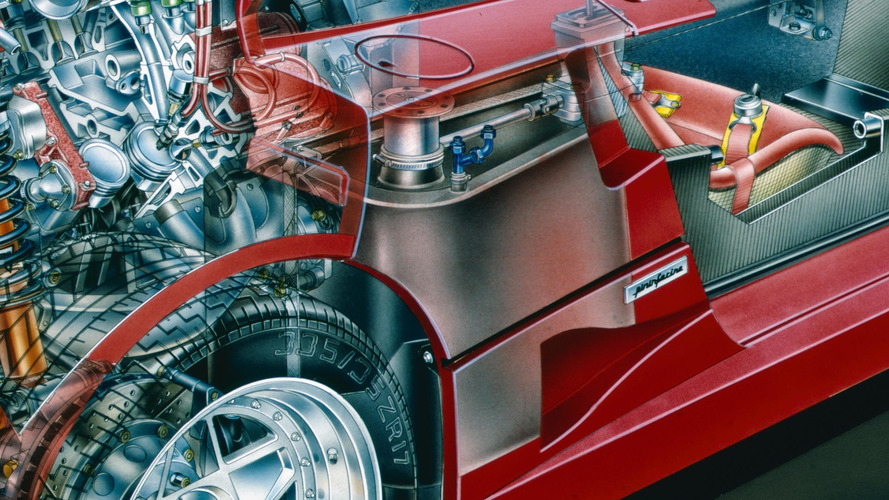 All F40s have dual fuel tanks, but European-spec F40s (which this one is, as well as being a prototype) use rubber bladders mounted in shrouds. To meet U.S. specifications, aluminum tanks were installed. While offering a slight difference in weight, the rubber bladders require replacement every 7 years whereas the aluminum tanks are permanent. 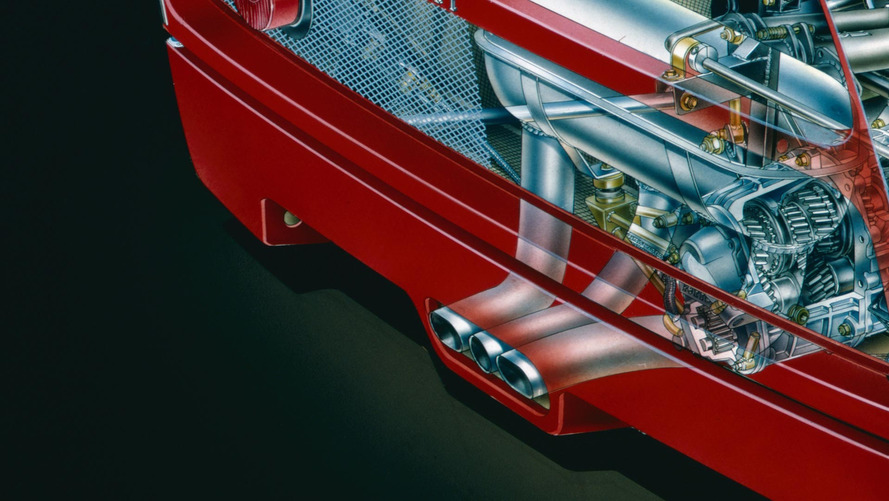 To meet U.S. crash and safety standards, bumpers were required on F40s destined for America. While obviously not present on this prototype, black rear bumpers follow the gap between the clamshell and lower valence. Up front, the black bumper mounts to the base of the front clip and looks more like a lip spoiler. Flanking both bumpers on U.S. cars are amber lights in front, red in back. 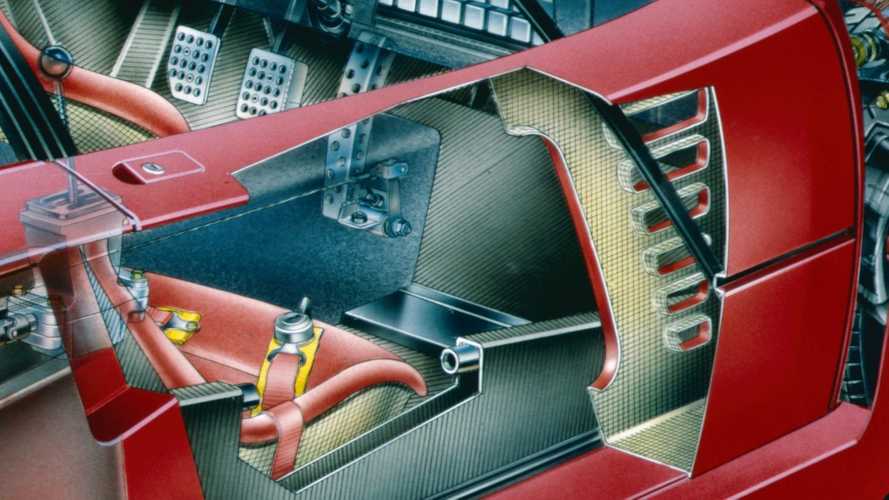 Slatted door inserts were options on earlier-production F40s, but with U.S.-spec versions arriving later in the production run, these are usually only seen on European models.

Sketching limited-production supercars, race cars, and even prototypes is certainly the norm for Kimble, but this F40 stands out because it’s really all three. Only 1,315 (or 1,311, depending on who you talk to) F40s were manufactured from 1987 through 1992, with just 213 officially built for the U.S. market. It was race-bred, evolving from Ferrari’s mission to create a dominating car for Group B racing. It was the first production car to break 200 miles per hour. And it was the last Ferrari to be graced by Enzo himself

6 Photos
Photo by: David Kimble
By: Christopher Smith
++
Got a tip for us? Email: tips@motor1.com