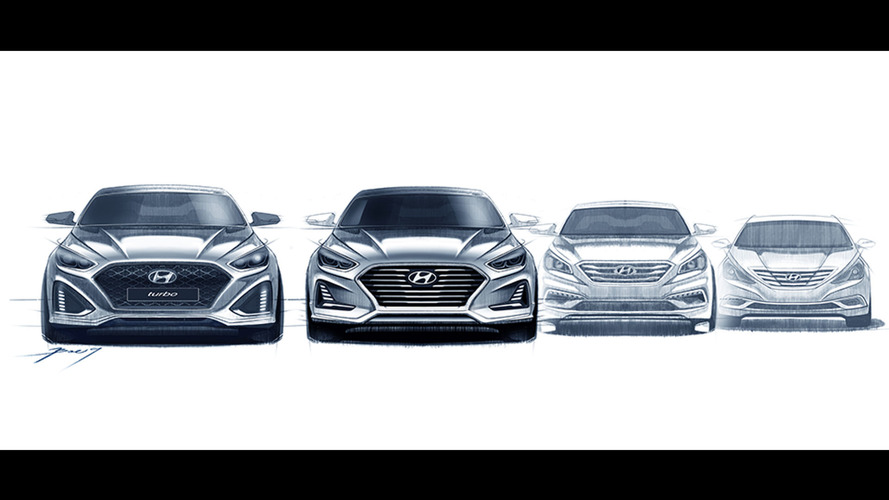 Expected to arrive this summer.

An official Facebook page of Hyundai has released the first sketches of the facelifted Sonata. The model has already been spied several times and is getting ready for a debut later this year – and is seen here in a regular and a sportier versions, alongside the previous two generations.

As one would expect, the drawings preview a super aggressive design, but expect the sharp lines to be replaced by a more conservative shapes for the final production versions. Still, the quad exhaust system of the sportier model could be retained, as the current Sonata with both 1.6 and 2.0 turbo engines has the same exhaust layout.

At the front, Hyundai is giving the Sonata its “cascading” radiator grille, flanked by even sleeker headlights than the current model features. Just like in the latest generation i30, the refreshed sedan will come with upright LED daytime running lights, integrated into the bumper.

Currently, the most powerful engine in the Sonata lineup is the aforementioned 2.0-liter turbo, which provides a peak power of 245 horsepower (183 kilowatts), channeled to the front wheels through a seven-speed automatic gearbox with two clutches. Previous reports have suggested this unit could be replaced by the new 2.0 turbo of the brand set to be used in the sporty i30 N. Word on the street says it will produce at least 260 hp (194 kW), making the Sonata 2.0T slightly faster.

We are still waiting for an official announcement from Hyundai, but we expect to see the facelifted 2018 Sonata in the coming months. CarAdvice says the New York Auto Show in April is a possible venue, where the car could make its first public appearance, but we will have to wait at least a couple of weeks for more information. Stay tuned.