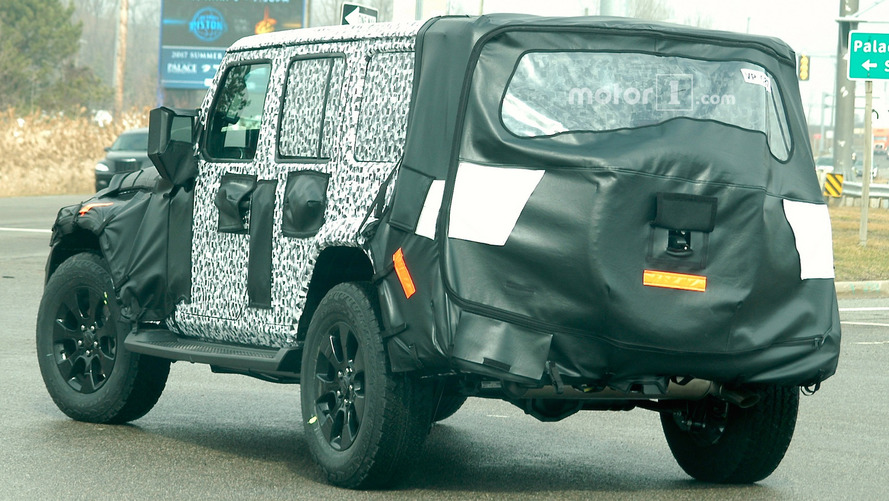 The new Jeep sheds some camo, but isn't ready to show off all the goods just yet.

Jeep sent off its current-generation Wrangler in style with the debut of the Rubicon Recon in Chicago. But now the automaker is looking forward to the arrival of its all-new, mostly aluminum model, making its debut within the year.

Though we don’t know much of the details surrounding this new and improved Jeep, these new spy shots should help crack the code. The Wrangler was spotted in Detroit wearing a bit less camouflage than before. Even with more of the body panels exposed, it’s tough to deduce exactly what the SUV will look like... other than boxy.

A few aerodynamic tweaks will give the body a sleeker look, and a slightly revised front grille and a fixed windshield will be among the most significant changes. It will also come with something we’ve never seen on the Wrangler before – a backup camera.

Underneath all that extravagant camouflage will be a new aluminum and steel construction that will bring the weight down significantly. The Pentastar V6 and eight-speed automatic transmission will come standard, but a new 3.0-liter V6 turbodiesel and a turbocharged four-cylinder "Hurricane" engine are expected to join the range. A hybrid powertrain has also been rumored.

Along with the same ruggedness you’ve come to expect in Jeep products past, the new Wrangler will see improved ergonomics and efficiency, making the typically niche SUV a bit more mainstream. No official word on when the new Wrangler will make its debut, but reports point to a debut either at the Los Angeles Auto Show later in the year, or at the Detroit Auto Show the beginning of 2018.