BMW i3 facelift spied with lowered suspension — is it the i3S?

The i3 electrified hatchback has been spotted on the streets of Munich trying to hide its visual refresh.

Caught on camera in the company of a pre-facelift Skoda Octavia RS Combi, BMW’s facelifted i3 was masking its subtle cosmetic revisions underneath a thin strip of camouflage. The lettering on the front doors and trunk lid may say “Hybrid Test Vehicle,” but in reality this was the full electric variant judging by the absence of a fuel cap on the right front fender. The range-extender version called “i3 REx” has a second cap to fill up the small nine-liter gasoline tank necessary to feed the 647-cc two-cylinder combustion engine.

The disguise can’t hide the fact the prototype was riding substantially lower than a regular i3 EV, which leads us to believe it was actually the rumored i3S featuring a stiffer suspension setup. Expected to debut alongside the facelift for the regular i3, the sporty version will allegedly use an upgraded electric motor delivering more than it does in the current specification: 168 horsepower (125 kilowatts) and 184 pound-feet (249 Newton-meters) of torque. 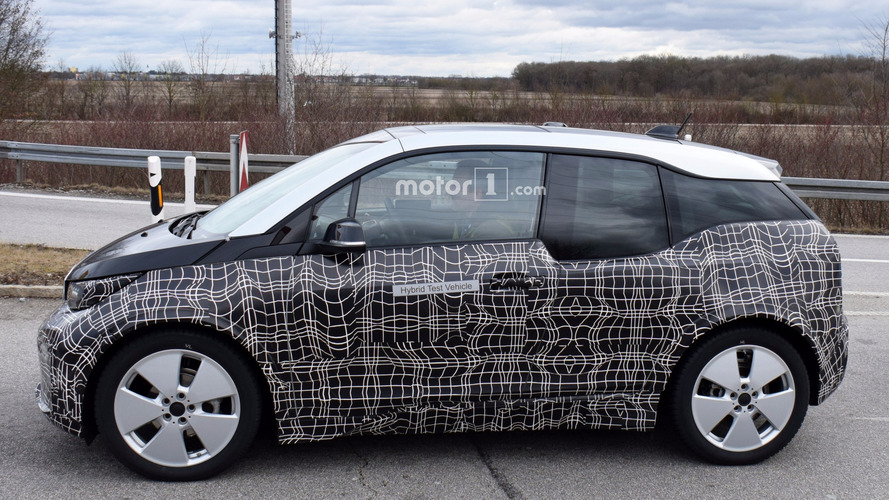 As a result of the extra electric punch, the BMW i3S will shave off a few tenths of a second from the 0-62 mph (0-100 kph) sprint time, which in the case of the regular model takes 7.3 seconds. A minor bump in terms of top speed over the i3’s current electronically capped 93 mph (150 kph) is also expected.

We should point out the i3 was updated last year when it made the switch from a 22- to a 33-kWh battery boosting range of the pure electric version to an EPA-certified 114 miles and a NEDC-rated 300 kilometers. It wouldn’t be too far-fetched to assume the Life Cycle Impulse (LCI) will come along with a prolonged range as a result of getting a beefier battery pack.

Expect the facelifted BMW i3 to be introduced in September at the Frankfurt Motor Show where it will presumably share the spotlight with the i3S set to become the most expensive version in the lineup.