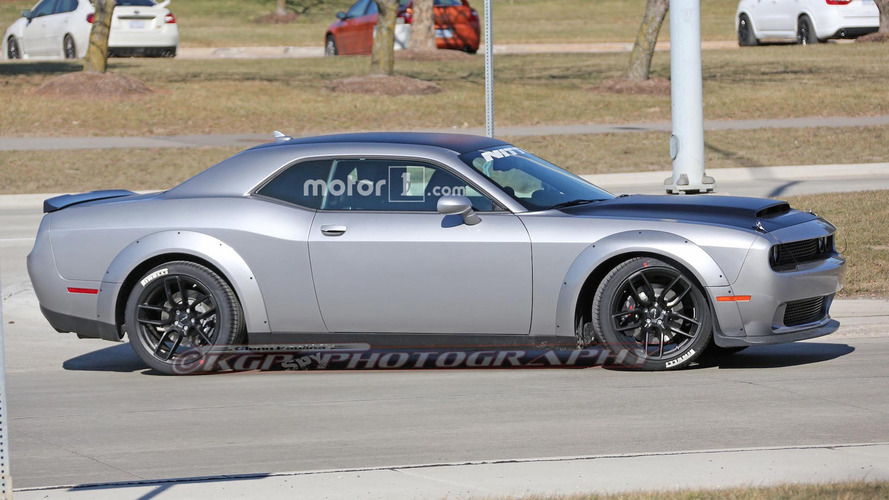 The Demon was caught on the road wearing its outfit from Fast 8.

This is the new Dodge Challenger Demon in the flesh – and guess what, it looks just like a Challenger. Who would have guessed? The prototype was spotted recently testing completely uncovered in the Detroit area, and gives us our best look at the upcoming muscle car yet.

The exterior wears a silver paint job with a matte black finish on the hood and roof. The bolted on fenders give it a more aggressive stance, the 45 square-inch (290.3 square-centimeter) hood scoop is the largest on any production car, and the stickers on the windshield, side skirts, and rear fenders add five extra horsepower.

Given the amount of exterior upgrades, this one looks like it will be part of the upcoming Fast and Furious movie. It’s the same color scheme was saw in the supposed "leaked" video back in January, and wears the appropriate amount of accessories for a cinematic masterpiece such as Fast 8. Not to mention is lacks the special Demon drag radials.

With an annoying number of teasers already released, we know that the Demon will be the 215 pounds (97.5 kilograms) lighter, possibly more powerful with a supercharged V8 under the hood, and even more prepared for the drag strip than the 707-horsepower (527-kilowatt) Hellcat. And that’s saying something.

Special Demon-branded 18- x 11-inch 315/40R18 Nitto NT05R drag radials will be available, as will a "first-ever" mechanical/electronic drag-race-specific suspension tuning system. An upgraded torque converter with a higher stall speed and 3.09 gearing for the rear axle should allow for hellacious acceleration.

Dodge will dish out a few more teasers – 14 in total – before the car makes its official debut at the New York Auto Show in April.

More of the Dodge Demon: