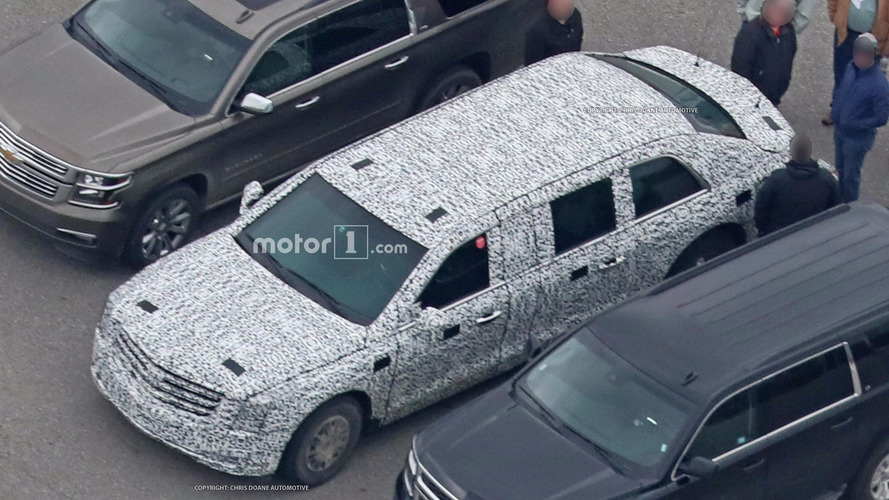 This beastly limo has enough armor to take some serious punishment and keep right on rolling.

President Donald Trump missed out on traveling in a new limo in time for his inauguration. However, a new gallery of spy photos indicates that the Commander in Chief should get to take a ride in it soon. The pictures show the so-called Beast with the production body panels and even some of the final chrome trim. Plus, as President Trump would say this vehicle is “yuuuge.”

For the President’s safety, General Motors and the government keep details about the limo a closely guarded secret, but certain things are obvious. The Beast is true to its nickname because the vehicle even looks gigantic next to a pair of Chevrolet Suburbans. As a replacement for President Obama’s limo, the new limo picks up on Cadillac’s current styling language by taking cues from models like the Escalade. Inside, the new version likely retains the previous interior layout with room for five passengers in the back and two Secret Service agents in front.

The Beast rides on a heavy-duty chassis that carries tons of armor. The limo reportedly weighs 15,000 to 20,000 pounds (6,800 to 9,000 kilograms), so that there’s enough protection to keep the President safe in nearly any attack. The Secret Service doesn’t offer any details. However, the agency said about the previous Beast in 2009, "it is safe to say that this car’s security and coded communications systems make it the most technologically advanced protection vehicle in the world."

The new Beast is going through a four-stage process that includes developing the armor, installing it on the vehicle, validation testing, and final production. Based on these spy shots, we suspect that GM is now in at least the third phase and possibly nearing the end. Given President Trump’s boisterous nature, expect him to make an announcement on Twitter when he finally gets to take a ride.

While it doesn’t pack the Beast’s high-tech security, one of President Trump’s old limos is currently for sale in the United Kingdom. The 1988 Cadillac served the Trump family for three years and features a television (with VCR), paper shredder, and safe inside. At $62,360 (£50,000), it’s far less than a tenth of the cost of the Beast, too.