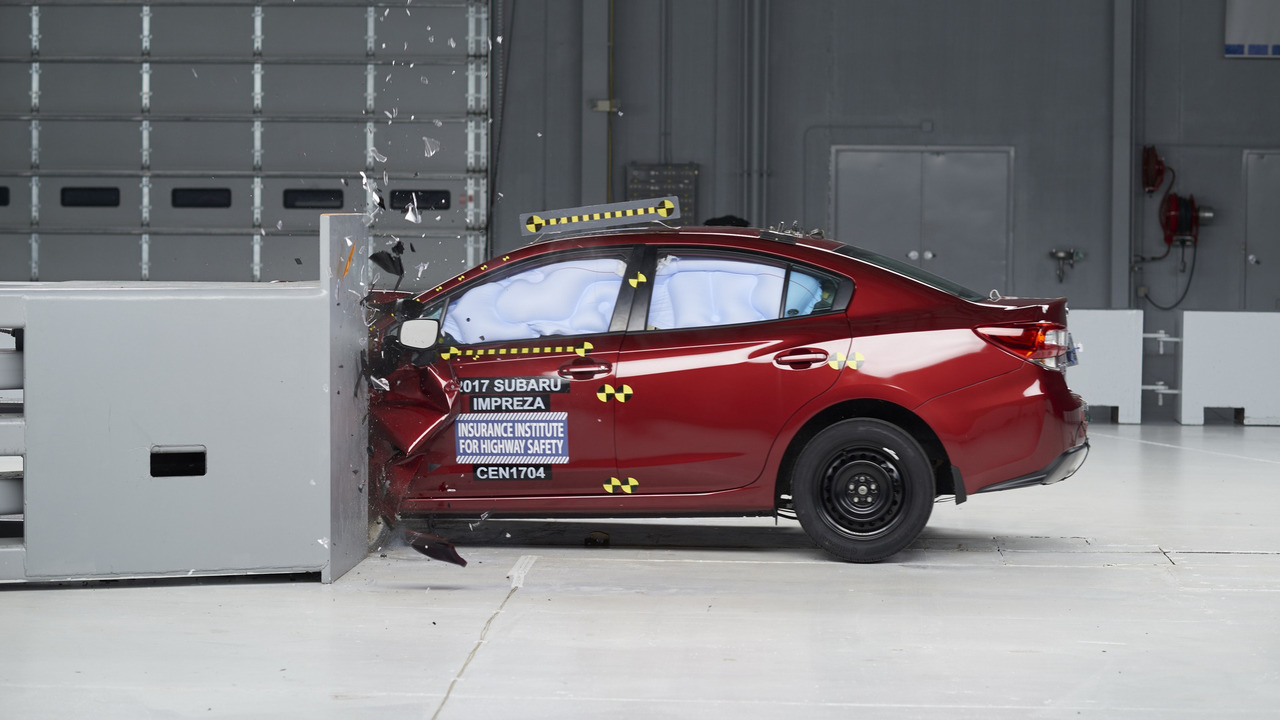 It's the only small car to earn top ratings in all 2017 IIHS evaluations.

The previous-gen Subaru Impreza fitted with the optional front crash prevention system scored a Top Safety Pick+ award from the Insurance Institute for Highway Safety. Fast forward to present day, the IIHS has given the new 2017 Impreza when equipped with the EyeSight array of safety systems and the adaptive LED headlights the same rating. It applies to both the sedan and the five-door, which we had the pleasure of reviewing.

The 2017 Subaru Impreza managed to receive a “Good” rating in the front small overlap, front moderate overlap, side impact, roof strength, and rear impact tests. The optional front crash prevention system has earned a “Superior” rating, while the headlights are “Good.”

It’s important to mention earning a TSP+ award is a bit trickier for 2017MY cars because the models tested by IIHS have to receive an “Acceptable” or a “Good” rating in IIHS’ new headlight test.

IIHS points out the 2017 Impreza’s “Good+” rating for ease of use of Lower Anchors and Tethers for Children (LATCH) hardware for installing child restraints makes it the only small car to obtain top ratings in all of the evaluations.

As a reminder, the online configurator for the 2017 Impreza has been up since the second half of October. A standard model kicks off at $19,215 (including destination), but you’ll have to pay extra to have EyeSight and the adaptive headlights. The most expensive trim money can buy kicks off at $25,415 for the 2.0 Limited in the five-door guise whereas the equivalent four-door sedan costs $24,915.

This range-topping model comes as standard with the LED headlights, but if you want the EyeSight safety tech, you’ll have to fork out more cash for one of the two optional packages available. The most expensive of the two will set you back $3,845 and will add goodies such as a Harman Kardon sound system, eight-inch navigation, moonroof, high-beam assist, reverse automatic braking, and blind spot with rear cross traffic alert. Max out the configurator and the price will rise to $30,350.

Both the Sedan and 5-Door versions of the Subaru 2017 Impreza received the 2017 TOP SAFETY PICK award by achieving the highest possible rating of “Good” in the IIHS crashworthiness evaluations of front small overlap, front moderate overlap, side impact, roof crush, and rear impact as well as EyeSight receiving a “Superior” rating in the Institute’s front crash prevention testing. The TOP SAFETY PICK+ award was achieved with EyeSight and LED Steering Responsive Headlights receiving a “Good” rating. The Impreza also earns the top rating of “Good+” for ease of use of LATCH hardware for installing child restraints. This makes it the only small car to earn top ratings in all IIHS evaluations as of February 2017.

“Safety is our top priority at Subaru,” said Thomas J. Doll, president and chief operating officer, Subaru of America, Inc.,” and each year we continue to improve and innovate the safety features and technology in our vehicles.”

The all-new Impreza debuted the Subaru Global Platform (SGP) that is designed to deliver significantly higher levels of crash protection, driving engagement, interior refinement, and ride comfort. The SGP, together with the SUBARU BOXER engine, Symmetrical All-Wheel Drive, and EyeSight, represent the brand’s core technologies and constitutes the basic foundation of the next generation of the Subaru vehicles.

The TOP SAFETY PICK award is given to vehicles that earn “Good” ratings in IIHS’s five crashworthiness tests — small overlap front, moderate overlap front, side, roof strength, and head restraints— along with an available front crash prevention system that earns an “Advanced” or “Superior” rating. The plus is added for winners that also have “Acceptable” or “Good” for vehicles headlights.