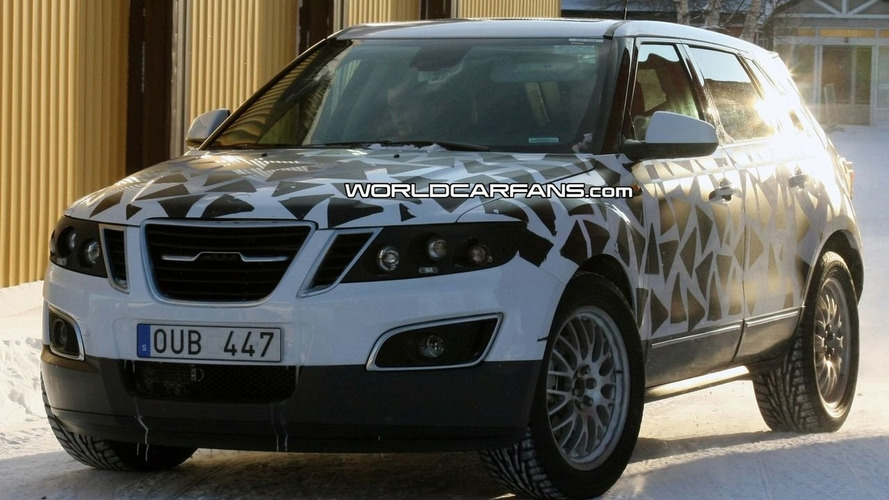 SAAB 9-4X has been spied wearing minimal camouflage which suggests a debut at next months Geneva Motor Show.

It feels like we have been looking at 9-4X prototype spy photos forever, but now it's time for its debut, we think. That's why this 9-4X prototype is almost uncamouflaged, except for the fake lamps and some black tape. Could it be that SAAB will show it together with the 9-3X at the Geneva Car Show?

This new SAAB crossover will share a lot of parts with the upcoming Cadillac SRX, but according to our sources, all parts that are shared will not be visible from the outside, despite the Opel badged steering wheel seen in the photos. SAAB wants a distinct SAAB-look and with strong design cues taken from the highly acclaimed Aero X concept and it seems like they have succeeded.

However, what we do know, thanks to leaked images from a Chilean SAAB website, is that it will be available with both diesel and petrol engines. Starting with a 2.0-liter turbo making 245hp and 400Nm of torque, 0-100km/h arrives in a healthy 6.4 seconds before reaching top speed of 250km/h (155 mph). Meanwhile, it's low displacement helps keep fuel consumption somewhat decent with figures of 10.6l/km highway (22 mpg US) and 15.9l/km (15 mpg US) city. Rumors are also talking about a two-wheel drive version for lower CO2, but surely most customers still want the four-wheel drive version?