Margot Robbie is the new face of Nissan EVs 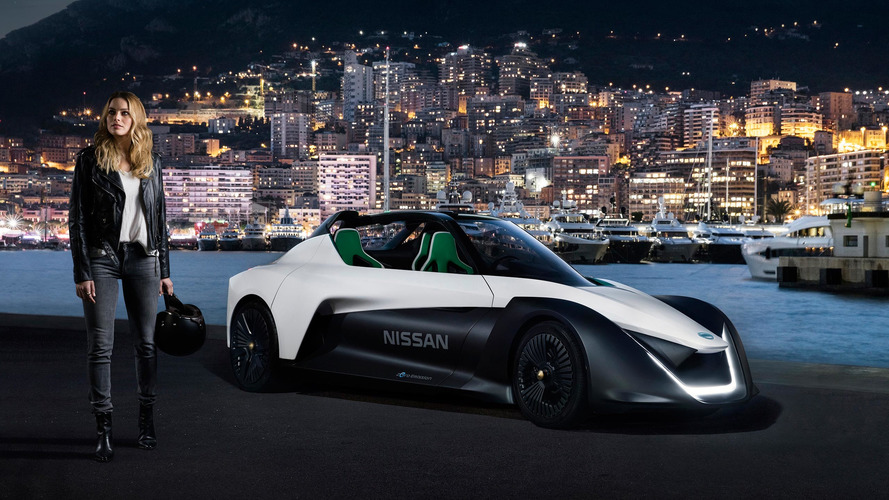 The actress does a great job of selling the Nissan BladeGlider concept while piloting the EV around Monaco.

Actress Margot Robbie is currently best known for her role at Harley Quinn in last year’s blockbuster Suicide Squad, and now she brings her talents to Nissan as the brand’s new spokesperson for electric and zero-emissions vehicles. To kick off the new gig, Robbie slides behind the wheel of the BladeGlider concept for a late-night race around the streets of Monte Carlo.

Robbie is quite charming in Nissan's promo video and seems legitimately excited to drive the BladeGlider. Ignoring the requests of the person speaking to her in the headset plays on a little of her bad girl persona after portraying Harley Quinn, too.

Nissan debuted the BladeGlider concept at the 2013 Tokyo Motor Show as an electric sports car with 1+2 seating inside. Its narrow front, wide rear layout took direct inspiration from the company’s Zeod RC race car but adapted the design for the road. The company revealed an updated version in 2016 with revised styling and two electric motors with a total output of 268 horsepower (200 kilowatts) and 522 pound-feet (707 Newton-meters) of torque. The firm estimated it would reach 62 miles per hour (100 kilometers per hour) in less than five seconds. The concept will be on display once again at this year’s Geneva Motor Show.

There have been numerous rumors about Nissan putting the BladeGlider into production, and the company continuing to promote the vehicle for years after the concept’s debut seems to support that idea. However, a lawsuit over whether the design violates DeltaWing's similar layout may be a hurdle to bringing the car to market.

Nissan’s EV development currently includes final preparations for the next generation of the Leaf. Renderings suggest the styling takes inspiration from the futuristic IDS Concept, and company CEO Carlos Ghosn confirms that semi-autonomous driving tech is among the available options.

Suicide Squad and The Wolf of Wall Street actor revealed as the new face of Nissan's electric vehicle and zero emission program
In first mini-movie, Robbie takes Nissan BladeGlider for a midnight spin around Monaco as company moves to attract new audience to the electric revolution

The prototype 190km/h Nissan BladeGlider, which hits 100km/h in less than five seconds, challenges the conventional thinking of what an all-electric sports car could look like in the future. Showcasing all the fun and excitement of pure electric vehicles, the prototype is part of Nissan's Intelligent Mobility vision of how cars should be driven, powered and integrated into society.

Margot Robbie put the radical three-seater through its paces around the closed Monaco street circuit before racing another BladeGlider. The pair of 272PS performance cars raced through the iconic Tunnel and diced with each other along Massenet before finishing in the glamour of Casino Square.

In the film, the Suicide Squad and The Wolf of Wall Street star is also seen demonstrating the drifting prowess of Nissan BladeGlider around one of the most famous corners in the world of motorsport – the iconic Fairmont Hairpin.

"It's a really exciting time for electric vehicles," said Robbie. "More people are choosing to go electric, leading the way to a more sustainable future and the Nissan BladeGlider hints at the future of smarter performance cars."

As the manufacturer of the world's best-selling electric vehicle, the LEAF, Nissan is also revolutionizing the way energy is generated and utilized with products like its intelligent xStorage Home unit and vehicle-to-grid technology, which harness the power of battery technology from electric vehicles.

"The electric revolution is happening," said Gareth Dunsmore, director of Electric Vehicles for Nissan Europe. "As the global leader in electric vehicles, and with mass adoption just around the corner, it is more important than ever that we showcase all of the benefits of driving an electric car – from energy efficiency, to sustainability, from handling to performance. Having Margot on board will support us in spreading news of the personal and societal benefits of electric vehicles to more people than ever before. Nissan's Electrify the World movement recognizes the importance of us all working together to achieve positive change in our communities. We want to inspire people to take meaningful steps towards cleaner, safer cities."

The Nissan BladeGlider will be on display at the 87th Geneva International Motor Show from March 7 to 19, 2017. Developed from a concept car first debuted in 2013, the all-electric sportscar is a precursor to a suite of future technologies that will combine Intelligent Mobility, environmentally friendly impact and sports-car driving capabilities.

Monte Carlo provided the perfect location for Nissan to reveal its exciting new partnership with Margot Robbie. Monaco has a rich heritage in street racing and an ambitious sustainable strategy to decrease carbon emissions by 50 percent by 2030.

About Nissan in Europe
Nissan has one of the most comprehensive European presences of any overseas manufacturer, employing more than 17,000 staff across locally based design, research & development, manufacturing, logistics and sales & marketing operations. Last year Nissan plants in the UK, Spain and Russia produced more than 660,000 vehicles including award-winning crossovers, commercial vehicles and the Nissan LEAF, the world's most popular electric vehicle. Pursuing a goal of zero emissions and zero fatalities on the road, Nissan is leading the field with its vision of Intelligent Mobility. Designed to guide Nissan's product and technology pipeline, this 360-degree approach to the future of mobility will anchor critical company decisions around how cars are powered, how cars are driven, and how cars integrate into society. Nissan is positioned to become the most desirable Asian brand in Europe.

About Nissan Motor Co., Ltd.
Nissan is a global full-line vehicle manufacturer that sells more than 60 models under the Nissan, Infiniti and Datsun brands. In fiscal year 2015, the company sold more than 5.4 million vehicles globally, generating revenue of 12.2 trillion yen. Nissan engineers, manufactures and markets the world's best-selling all-electric vehicle in history, the Nissan LEAF. Nissan's global headquarters in Yokohama, Japan manages operations in six regions: ASEAN & Oceania; Africa, Middle East & India; China; Europe; Latin America and North America. Nissan has been partnered with French manufacturer Renault since 1999 and Mitsubishi Motors since 2016 under the Renault-Nissan Alliance.
For more information on our products, services and commitment to sustainable mobility, visit our website at http://www.nissan-global.com/EN/.  You can also follow @NissanMotor on Twitter.