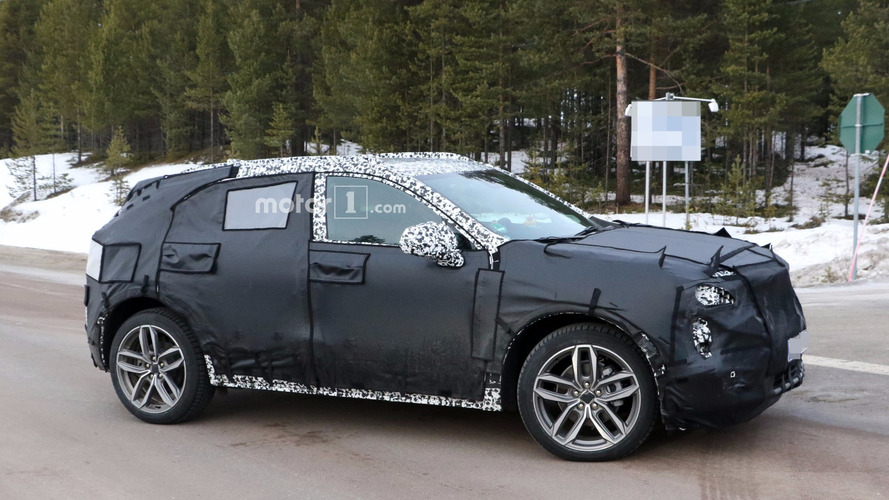 Cadillac has been spotted polishing up its belated answer to the compact luxury crossover segment.

With the Escalade being visible from the moon due to its sheer size and the XT5 also being quite large, Cadillac certainly needs to downsize. It’s doing so with this, a compact crossover tentatively called "XT3." Judging by the amount of camouflage the prototype is wearing, an official reveal is unlikely to occur in the foreseeable future. Once the disguise will come off, expect a sharp body taking cues from its bigger brother and quite possibly from the Escalade luxobarge as well.

As a matter of fact, you can actually see the taillights extend into the D-pillars in the same vein as on the Escalade. Those are provisional clusters, while the dotted LEDs at the front might be a part of the production-ready headlights. The front clusters will flank Cadillac’s signature pentagonal grille with a glossy black honeycomb pattern already visible despite the black piece of disguise, which by the way looks like a garbage bag.

The 2019 XT3 is expected to share many of its bits and pieces with the recently unveiled 2018 Chevy Equinox and the 2018 GMC Terrain, so expect cheaper versions to be front-wheel drive while the more expensive ones will have a grippy AWD setup. Taking into account the prototype clearly had an intercooler; it means the production model will be offered with at least one turbocharged four-cylinder engine like the other two models. A 2.0-liter could very well be in the offing with 252 horsepower (188 kilowatts) and 260 pound-feet (353 Newton-meters) of torque as seen in the Equinox & Terrain duo.

Cadillac has already announced plans to introduce the XT3 in the second half of next year, so it will go on sale as a 2019MY. There’s no word on pricing just yet, but with the XT5 kicking off at $39,395 MSRP, expect the brand’s entry-level crossover to start from a little over $30,000 and boast Caddy’s new infotainment system.