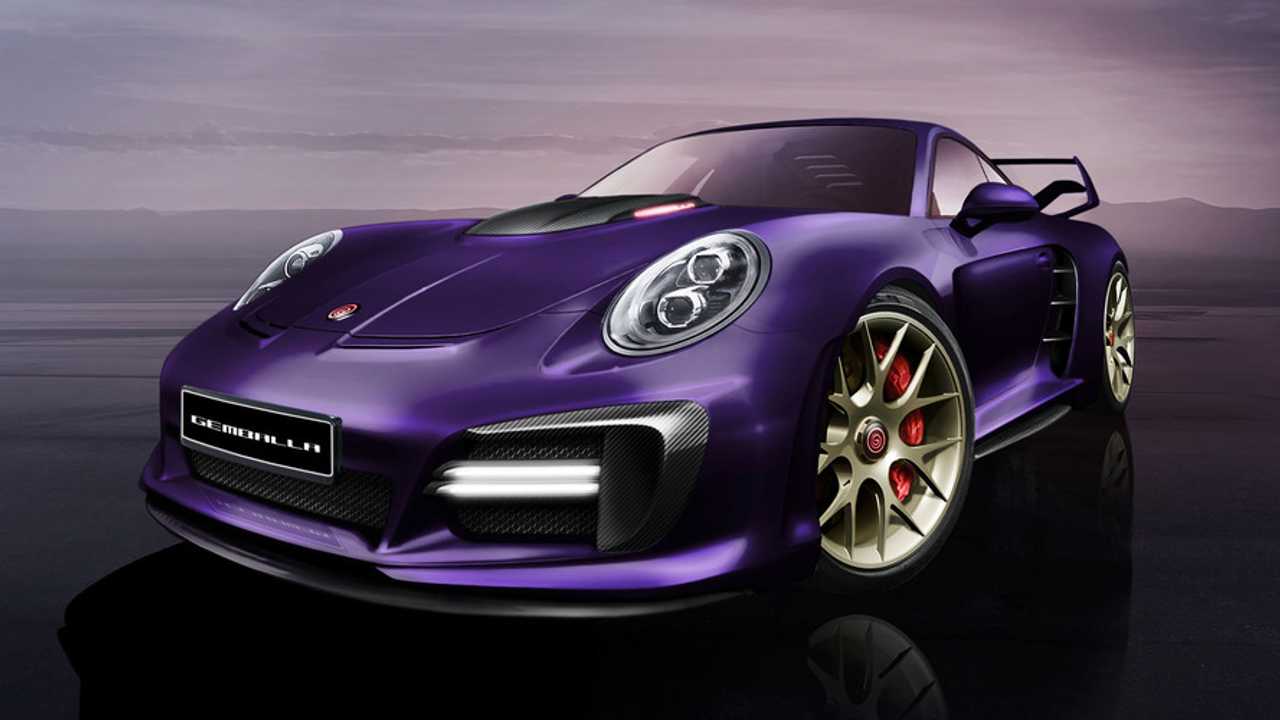 We will have to wait a few more weeks until the Geneva Motor Show for full disclosure, but what we’ve seen thus far of the new Gemballa Avalanche suggests the wait will be worth it. Based on the current 991-series Porsche 911 Turbo, the Avalanche will deliver all kinds of rear-engine insanity thanks to no less than 700 pound-feet of twist and 809 horsepower. For those keeping score, that’s almost 300 more ponies than you get from a standard 911 Turbo, which already rips to 60 miles per hour in roughly 3 seconds.

That’s all the information we have at this time, aside from a couple photos that reveal prolific carbon fiber, lots of purple, and enough wings to warrant interest from the Federal Aviation Administration. It would seem the engineers at Gemballa want to ensure the rear stays planted at speed, or they’re simply paying homage to the Red Baron’s Fokker Dr. I triplane. Speaking of homage, that carbon fiber bulge on the hood is oddly reminiscent of a shaker scoop, which would make sense if the engine was actually there. Could Gemballa have some Dodge Challenger envy?

That’s okay; aggressive aesthetics are part of the Gemballa formula. And with 800-plus horsepower on tap, the wings, fins, bulges, and purple haze take the Avalanche properly over-the-top in the looks department. We don’t have any performance figures, but sub 3-second 0-60 runs and a top speed easily north of 200 mph are safe assumptions. Beyond that, Gemballa CEO Steffen Korbach said in a press release that “they are also set to break some records.” He was referring to the Avalanche and the Gemballa GTR 780 EVO-R, a car which we haven't seen but is also set to debut at Geneva. Is the bar about to be reset for street-car performance at the Nurburgring?

If the previous incarnations of the Avalanche are any indication, we should be in for a heck of a ride.

The introduction of the GEMBALLA AVALANCHE in 1985 placed into the shadows
everything that had been achieved in the field of car tuning until that time. Its extroverted
exterior design, the opulence of its interior, and its dynamic driving capabilities ensured
GEMBALLA’s AVALANCHE was in a category of its own in the new field of personalised
supercars and thus a pioneer of the entire tuning industry.

By presenting its latest AVALANCHE – based on the Porsche 991 Turbo – GEMBALLA is
sending another supercar onto the racetrack, which sets new worldwide standards in
design and performance. With an uncompromising design, extreme performance of 820 PS
and primal torque of more than 950 Nm, the GEMBALLA AVALANCHE is an indefinable
creation of engine sounds, power and acceleration to blast you across the horizon.

“We will be presenting two supercars in Geneva, the GEMBALLA AVALANCHE
and GEMBALLA GTR 780 EVO-R, which both set new standards in performance and style.
They are also set to break some records”, promises Steffen Korbach, CEO of GEMBALLA
GmbH.

Experience the spectacular world premieres of the GEMBALLA AVALANCHE and
GEMBALLA GTR 780 EVO-R (both based on the Porsche 991 Turbo) at stand 6430 in Hall 6
between the 9th and 19th of March 2017 (press events: 7th and 8th of March).

About GEMBALLA:
GEMBALLA was founded in 1981 by Uwe Gemballa. The company was acquired by Steffen Korbach in 2010
and has been under his leadership as CEO since 2016. GEMBALLA has been registered as a manufacturer by
the German Federal Motor Transport Authority since 1985. GEMBALLA exclusively manufactures topquality,
personalised vehicles and strives toward extreme increases in performance through high-quality
tuning, luxury interior design, and a unique exterior style.