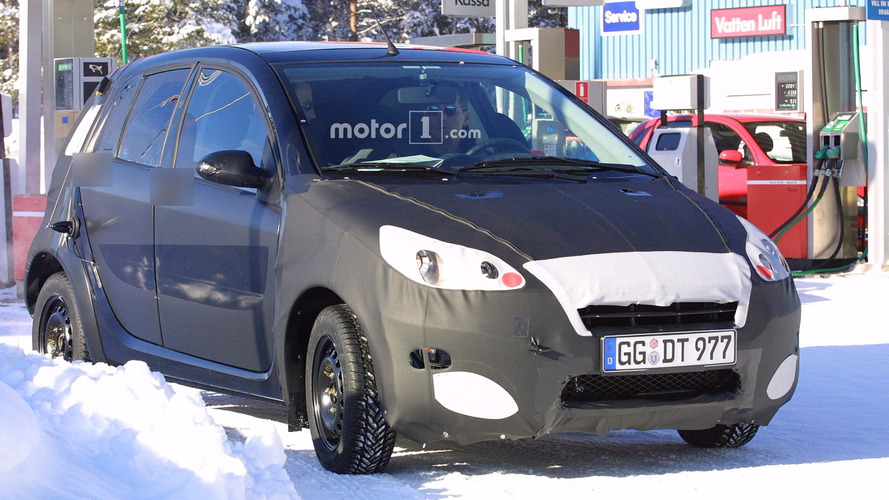 The camo did a good job at hiding the funky, yet questionable design.

[Update] And the answer is... First-generation Smart ForFour.

After a couple of big two-door coupes, this week’s mystery prototype has an entirely different body style. Obviously much smaller and with rear doors, the car had potential to end up in our article about models with not-so-great names, but ultimately it didn’t make the cut because of other poorly titled vehicles.

As with most of our spy shots so far in the weekly series, this one is from the early 2000s and was taken at a gas station somewhere in Sweden where the prototype was being tested. When it did arrive on the market, the car in question was actually short-lived, being axed only a couple of years after its introduction due primarily to a weak demand. It returned for a second generation after an eight-year hiatus and it’s on sale to this day with a significantly different design.

In a bid to cut development costs, the car shared many of its bits and pieces with another model from an entirely different automaker based on another continent. Not only that, but the two were actually made at the same factory that did not belong to any of the two automakers. Shortly after being introduced, the car depicted here spawned a somewhat performance version tweaked by a reputable tuner with a long tradition.

Its successor is also the result of a joint development, but this time around with another partner from the same continent. The mechanical differences between the first and second generations are skin deep as basically everything was changed, including the placement of the drivetrain. In addition, production takes place at another factory in a different country.

To get an idea of what’s up ahead, next week we are going to have another prototype with four doors, but larger and much more expensive.

Check back tomorrow morning (GMT) to find out the answer to this week’s spy photo riddle. Meanwhile, we invite you to try and solve the puzzle in the comments section below, or head to our Facebook and/or Twitter media channels and post your answer there.