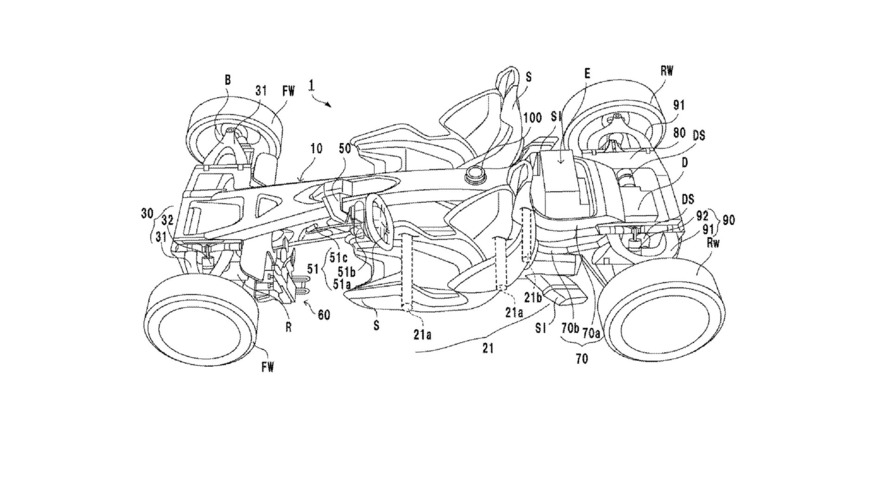 This little roadster looks like so much fun. Could this patent be a sign that Honda wants to build it?

A newly published patent in the United States suggests that Honda is still toying with its Project 2&4 Concept from 2015. The filing specifically outlines a body structure with a backbone frame running down the center of the vehicle. The illustrations of this fascinating idea have a striking similarity to the bare bones show car from a couple years ago. The company filed this patent in the U.S. on August 2016, and the Patent Office published it on February 16, 2017.

By using a die-cast aluminum beam, Honda figures it can create “a body structure that can reduce the number of parts, and also improve stiffness to give the occupant a direct feel of acceleration like an automobile,” according to the patent. The single piece would theoretically maintain rigidity while also reducing weight. In addition, the production process would be relatively simple because the necessary components would bolt to supports that come out of the spine in the center, like for mounting the steering, pedals, and seats.

Honda’s description of how the powertrain would work makes us want to drive a vehicle like this. The engineers would cast an opening in the aluminum backbone, and the powertrain would fit inside. The company is clear that either a combustion engine or electric motor would work. The fuel tank would be in a hollow portion of the vehicle’s spine, too. According to the patent, one or two wheels could attach to the back.

When driving alone, the owner could detach the passenger’s seat to lower the vehicle’s weight. The person could also install a cowl panel in the chair’s place at those times for better aerodynamics.

Honda considers two alternatives for improving the vehicle’s safety, too. One option is for and inflatable airbags – one at the front and one behind each seat. Alternatively, the company considers using telescoping rods (see below) in the same locations that would offer continued support even after a rollover.

Honda debuted Project 2&4 Concept at the 2015 Frankfurt Motor Show as a joint project between the company’s automotive and motorcycle engineers. The show car mounted a 999cc V4 engine behind the driver with 212 horsepower (158 kilowatts) and 87 pound-feet (118 Newton-meters) of torque. It weighed just 893 pounds (405 kilograms).

A simple, lightweight roadster from Honda definitely has our gears spinning, especially as a competitor to the Mazda MX-5 Miata. Unfortunately, filing a patent isn’t a guarantee that an idea is coming to market. It’s just as possibly that Honda is protecting this cool idea from someone else using it.

However, Honda designer Martin Petersson told Top Gear in 2015 that the company wasn't done with the Project 2&4. "There will be a next step. It’s been too positive for us to go and complete this project in a basement somewhere," he said at the time. Maybe this patent filing is a sign that that there could be an official update about the vehicle soon.