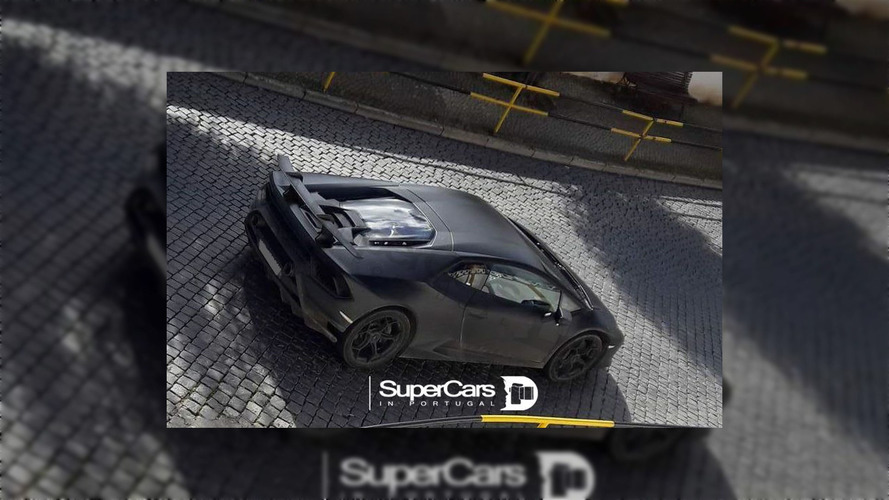 After catching a glimpse of the Huracan Performante’s parts made from forged composites, the V10-powered raging bull is making headlines yet again today courtesy of a revealing spy shot from Portugal. We’re looking at a near-production prototype featuring a matte black exterior flaunting its intricate rear wing. The reason why it’s so special is because not only is it made entirely out of forged composites, but it also eschews the conventional hydraulic struts in charge of changing the wing’s position to make room for electronically controlled motors to open and close the flaps considerably quicker.

It is part of the newly developed “Aerodynamica Lamborghini Attiva” technology set to make its debut on the Huracan Performante. The clever active aero system is going to work between 43 and 193 mph (69 to 310 kph) to make the hardcore baby Lamborghini as sleek as possible. Positioned right under the V10’s engine cover are two intakes, each fitted with dual scoops: one responsible for feeding cool air onto the exhaust, while the other grants airflow into the rear wing. Depending on situation, these dual flaps can open individually or both at the same time, while the air exists via an outlet installed on the wing’s underside.

Getting back to the forged composites, the tech is going to be implemented both inside and out in a bid to shave off as much weight as possible. A diet of approximately 90 lbs (41 kg) is expected, along with a bump in output for the naturally aspirated 5.2-liter of up to 40 hp (30 kW). A faster gearbox, new exhaust system, bespoke tires, and a reworked suspension will round off the upgrades.

Considering Lamborghini did not even bother to camouflage this prototype, chances are an official reveal is imminent. We know for sure it will debut in Geneva early next month, so look for an online premiere as early as next week.