Acura NSX-inspired engine design could hang off your next boat 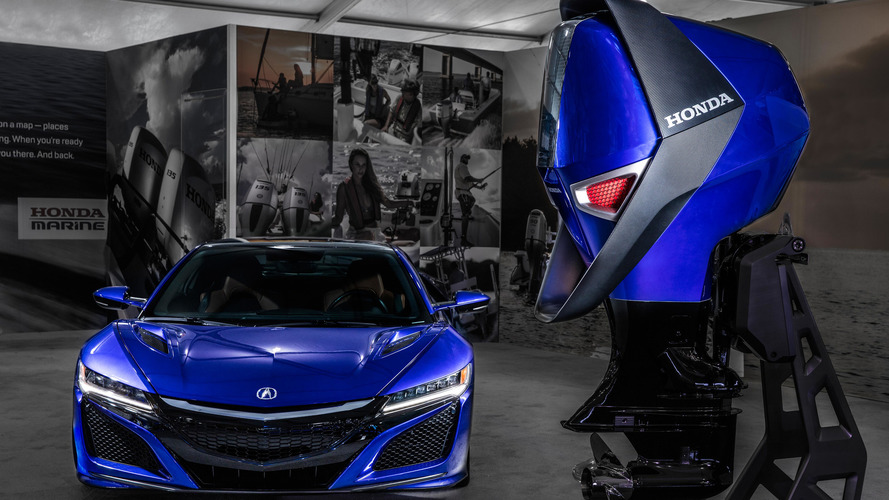 Honda is still deciding what engine to put in these cool looking enclosure, and it's listening to the opinions of boaters.

The concept engine’s look from Honda’s Advanced Design Group. The folks there completely reimagine what a boat’s powerplant would look like. Rather than being purely utilitarian, this mill exudes style. A floating blade with satin black paint dominates the look, and the designers claim the new NSX is the direct inspiration for the part. The mesh center section references the supercar’s intakes, and the red panels create a connection with its taillights. The Nouvelle Blue Pearl paint on the body of the engine also comes from the palette available on the Acura.

“The inspiration for the design of this engine was driven by the feeling you get when at the helm of a powerful boat on the water – the rush of excitement, the exhilaration and freedom, the feeling that hits you immediately with the boat at full throttle and the water and air around you,” Will Walton, Assistant Vice President of Honda Marine, said in the concept’s announcement.

Before getting too excited, understand that there isn’t a powerplant underneath the Honda Marine engine concept’s brilliant styling. “It is strictly a design concept right now, but the design of the engine allows a wide variety of power plants. We are interested to hear what boaters would like to have power it,” Honda spokesperson Kathy Graham told Motor1. The shape on display is somewhat taller than what’s on a conventional boat, so visitors to the show in Miami can imagine a variety of mills fitting inside.

The natural match for this NSX-inspired exterior would be the supercar’s biturbo 3.5-liter V6. Without the supercar’s electric motors, it’s good for 500 horsepower (373 kilowatts) and 406 pound-feet (551 Newton-meters) of torque.

Honda Marine offers a vast number of engine options to customers in the United States. The most powerful one currently available to consumers is the BF250, which is a 3.6-liter V6 making 250 horsepower (186 kW).

Rumors suggest that Acura might considering building a lighter version of the supercar without electric motors on the front axle for the NSX Type R. The rear-wheel drive model would reportedly also make extensive use of carbon fiber and feature wilder aerodynamic aids. Renderings and the look of the NSX-GT in Super GT and NSX GT3 might offer a hint of what to expect if a production model is actually under development.

•          Sleek, Stylish concept engine – inspired by the Acura NSX American-made Supercar – imagines a bold new engine for the future of what marine engines could be

ALPHARETTA, Ga., February 16, 2017 – Honda Marine breaks the mold for marine engines at the 2017 Miami International Boat Show with a bold concept engine that could power the future of boating. With inspiration from across Honda’s lineup – including automotive, marine and aeronautical – the design concept engine is a blue sky vision for what future marine engines could look like.

“The Honda Marine Design Concept Engine is a clear indicator that Honda is committed to the Marine business, continuing its legacy of innovation and groundbreaking marine products with a vision of what future Honda Marine power could be,” said Will Walton, Assistant Vice President – Honda Marine.

Designers at Honda’s Advanced Design Group were given a ‘clean sheet of paper’ opportunity to design a concept motor that could be applied to a variety of engines. For design inspiration, the group looked across the portfolio of Honda’s varied product lineup, from current marine outboard motors to automotive products like the Acura NSX Supercar, to the Honda Jet.  The group started with some sketches and then moved to digital modeling to create the dimensions and look of the concept engine.

“The inspiration for the design of this engine was driven by the feeling you get when at the helm of a powerful boat on the water – the rush of excitement, the exhilaration and freedom, the feeling that hits you immediately with the boat at full throttle and the water and air around you,” said Walton.

For exceptional aerodynamics, the tailored packaging of the Honda Marine concept engine includes a sculpted center channel inlaid with a honeycomb mesh trim. The heat ducts feature an interwoven design with black honeycomb mesh reminiscent of the intakes on the 2017 Acura NSX.

The Honda Marine engine design concept follows on the heels of the introduction of: the new Honda BF100; BF225 and 250 White motors; iST (intelligent Shift and Throttle) for the BF250; the all new BF4, 5 and 6 engines; soon to be released BF40, BF65 and BF105 Jet Models; and new for Miami, the redesigned BF40 and BF50 engines. All within a 24-month time span.

The 2017 Miami International Boat Show marks the debut of the “Destination Honda” display for Honda Marine. Destination Honda recognizes that there are some places you won’t find on a map, it’s a hardwired passion, it’s the yearning to chase another sunset. It’s a lifestyle.

The new Honda Marine display includes Honda products outside a traditional marine display, including the 2017 Acura NSX Supercar.  “Destination Honda” shows the breadth of the Honda corporate lineup for the full lifestyle of the marine customer.  From lawn and garden equipment to automobiles to jets, Honda is uniquely positioned to satisfy the mobility needs of a customer’s lifestyle.

Honda Marine also will spotlight the new Blackshear 200VSK skiff. Honda Marine entered into a partnership with H2O Sports Manufacturing, LLC in 2016 for the production of the Blackshear line of skiffs, which are exclusively powered by Honda Marine Engines.

Initially, the lineup will consist of two V-bottom skiff models, the 20-foot 200VSK and 22-foot 220VSK. Both are constructed with high quality boat building materials and exceptional craftsmanship.  Two additional models will later join the Blackshear line-up in 18-foot and 24-foot variations.  Honda Marine will ultimately supply the entire Blackshear model line with power ranging from the Honda BF50 to BF250.

With the new Honda signature “crouching form” design, a new multi-function tiller handle (late availability), a multi-function-display with trolling control and a new switch panel application for multiple engine installations, the refreshed Honda Marine engines deliver consumers upgrades they will appreciate every time they take out their boat.  In addition, the new BF40 and BF50 models have added a new freshwater water flushing hose for ease of maintenance, have reduced engine vibration at idle compared with the previous models and achieved Safety of Life at Sea (SOLAS) certification.