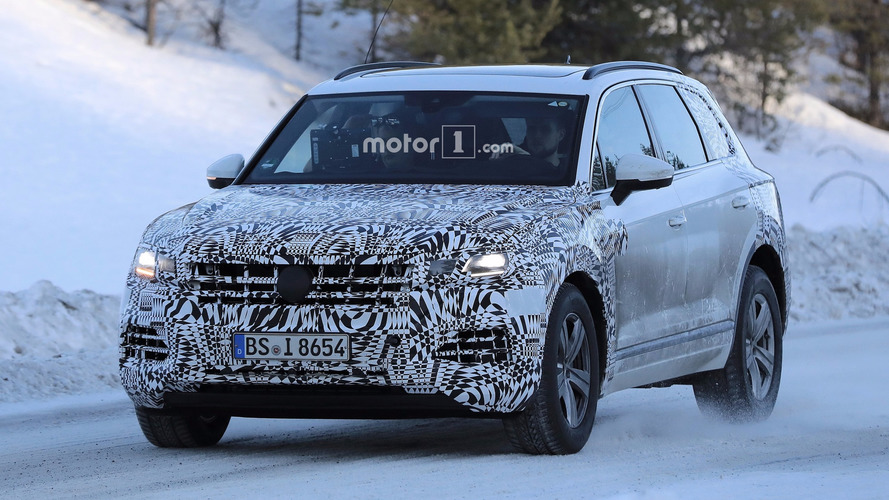 The exterior design will be evolutionary, while everything else is going to be vastly different.

The most luxurious SUV the Volkswagen core brand has to offer is getting ready to make the transition towards a third generation. Latest spy shots from Sweden are showing the folks from Wolfsburg are now putting the finishing touches on the midsize high-riding vehicle set to adopt an oh-so familiar exterior design as seen on these two prototypes. To get an accurate idea of how it’s going to look once the camo will come off, just check out these two official images of the T-Prime Concept GTE unveiled almost a year ago.

Now that VW has a seven-seat Tiguan in its range, it likely means the Touareg is going to grow in size to distance itself from the lesser and more affordable SUV. Don’t worry; it’s not going to get fatter as a result of the increased footprint considering it will take advantage of brand new underpinnings. Indeed, the MLB Evo platform used by the group for the Audi Q7, Bentley Bentayga, the next-gen Porsche Cayenne and the forthcoming Lamborghini Urus will serve as foundation for the all-new and lighter Touareg.

While in Europe diesels are going to be the bread and butter, for obvious reasons the situation will very different in United States. Americans will likely be stuck only with gasoline engines, such as the trusty 3.6-liter VR6 from the Atlas where it pumps out 276 horsepower (205 kilowatts) channeled to a 4Motion setup via an eight-speed automatic transmission. At least one TSI engine bringing turbo power is likely on the agenda as well, together with a plug-in hybrid taking into account the T-Prime Concept GTE was electrified.

The next-gen Touareg is coming later this year, quite possibly at the Frankfurt Motor Show scheduled for September. Sales should kick off either by the year’s end or early 2018. Since it’s going to be advertised as a high-end product, the Touareg will command a significant premium over the Atlas, especially since word on the street says the next generation will be moved further upmarket. Right now, the Touareg kicks off at $49,495 in the U.S. of A. where the cheapest Atlas money will be able to buy is going to cost about $30,000 when the large SUV will go on sale this spring.