Raptor to the Rescue: To Boston and back to save Detroit’s favorite Mercedes 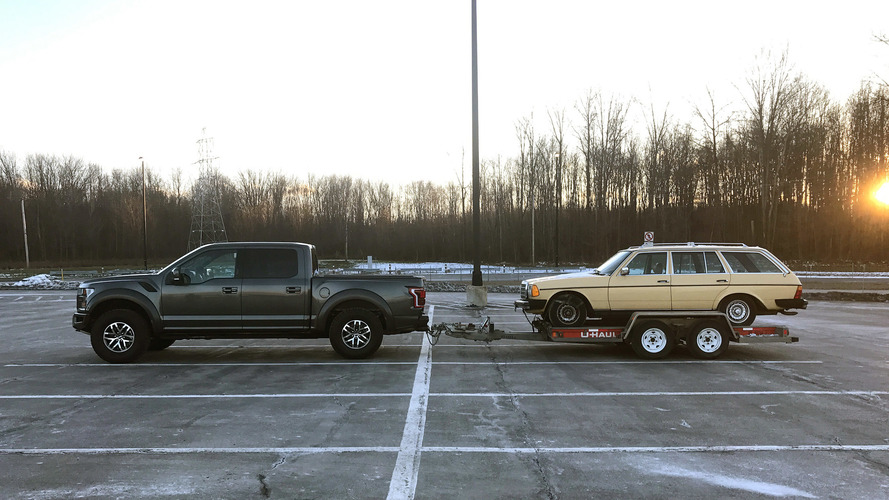 In which Ford's Raptor proves it’s as much of a serious truck as it is a fun, Baja-blasting toy.

One look at the parking lot behind European Auto Solutions in Waltham, Massachusetts, and it’s obvious these guys know a thing or two about Benzes. The most beautifully eclectic collection of classic Mercedes metal is on hand, cared for by skilled technicians who specialize in the sort of persnickety engineering built into every drop of decades-old Daimler.

My buddy Daniel Golson is no stranger to the team at EAS – and neither is his W123-generation 1984 Mercedes-Benz 300TD Wagon, painted in an iconic shade that I can only describe as “German taxi beige.” This was Daniel’s first car, purchased secondhand when he still lived outside of Boston. But after moving to Detroit, where Golson studied at the College for Creative Studies and currently works as an online production assistant at Car and Driver, the Mercedes gained a bit of a cult following. At a party of auto industry folks following the 2016 Detroit Auto Show, an attendee had no idea what Daniel's name was, but instantly knew him as “the guy with the Mercedes.”

You can imagine the collective heartbreak, then, when the 300TD blew its engine and died a few months ago, off the side of Interstate 94 just west of Detroit. (For the record, Daniel saw all four GMT201 vans that day, and was therefore destined for tragedy.)

I had to help save the Mercedes. The Mercedes. So without a second thought, I offered my services to tow the W123 from Detroit back to Boston, some 800 miles. I would need a truck – one that could safely tow upwards of 6,000 pounds, but that would be comfortable enough to handle a 1,500-mile round trip. A Ford Super Duty was the logical choice, but that’s too easy. I could’ve gone with something like a Ram 1500 EcoDiesel, but again, too easy. And that’s when I remembered I had a Raptor on the test-car schedule. Perfect.

The backup assist lets you “steer” with a controller on the dash – just turn left or right based on where you want the trailer to go, and the truck does everything else.

As I’ve told you before, the 2017 F-150 Raptor is a marvelous truck that’s both outrageously capable and downright great to live with, looking wholly badass in the process. It’s important to point out, however, that I could only have done this trip in the SuperCrew model, which is rated to tow 8,000 pounds. The shorter SuperCab is only rated for 6,000. Still, whenever I told someone I’d be towing the Mercedes with a Raptor, the response was always, “that’s so cool.” But beyond its image as a super rad truck, the Raptor – like the full F-150 range – comes with a lot of helpful technology that makes it a champ for when it’s time to get dirty and go to work.

The towing aid starts with several different backup camera views, so you can see things from trailer level, and above. There are directional lines for the side of the truck, and one in the middle that shows you where the hitch ball is headed – reversing at the U-Haul station, all I had to do was wait for the attendant to yell “woah!” to know I was back far enough. With the trailer attached, the Raptor’s backup assist function lets you “steer” with a controller on the dash – just turn left or right based on where you want the trailer to go, and the truck does everything else. It’s beyond simple, and makes negotiating a big car trailer as easy as using a joystick.

For the 800 mile drive from Detroit to Boston, Daniel and I opted to go south, around the U.S. side of Lake Erie, simply because I didn’t feel like dealing with angry border patrol agents going into Canada. (A truck I don’t own, with manufacturer plates, pulling a rented trailer and a non-running car I also don’t own, and I’m “just passing through.” Not suspicious at all, right?) We left on a Friday afternoon, after an incredible struggle of actually getting the W123 onto the trailer. We thought the car could drive under its own power long enough to get on the flat hauler, but no. So we pushed it. And failed. Then we pushed it with Daniel’s NA Miata, and succeeded. (The answer is always Miata.) In retrospect, I wish someone would have caught it on video.

Daniel and I decided to split the drive over three days. Friday would be Detroit to Syracuse, Saturday we’d finish the trek to Boston and then come back to Syracuse for some sleep, and then Sunday we’d cut through Canada (free of trailer and Mercedes) and get back to Detroit in time to watch the highly anticipated Lady Gaga concert that was taking place in the middle of some big football game.

The Mercedes is like a combination couch and bank vault when it’s running in top form. It’s a lot like me – in its early 30s, but with so much love to give.

Friday’s drive was through the greater part of Dullsville, U.S.A., where we counted bad Landau roof jobs in Ohio while cruising at 60 miles per hour down Interstate 90. Into Pennsylvania and on into New York, we hit some slick, snowy weather for a spell, which the Raptor negotiated with aplomb, though the lousy trailer tires out back occasionally had the Mercedes sidestepping a bit on the freeway. Not fun, but things never got out of hand – the Raptor was surefooted, and kept moving us forward.

We got the W123 to EAS midday Saturday, the Mercedes covered in a thick, gross layer of grime and road salt. Seeing it among the outstanding collection at the Massachusetts-based shop was inspiring – I knew we were leaving it in good hands. I’m eager to see it running around the streets of Detroit again.

The car is like a combination couch and bank vault when it’s running in top form. It’s a lot like me – in its early 30s, but with so much love to give.

As for the actual experience of towing, after 812 miles, the Raptor wasn’t even phased. With an average speed between 55 and 60 mph on the freeways, and much slower speeds around town, I recorded an average of 13.2 miles per gallon – lower than the 15-mpg EPA city rating, sure, but I also had over 6,000 pounds of German metal and a big ol’ trailer clinging onto the back. Plus, with the transmission put into its tow setting, it tends to hold gears a bit longer than you’d expect – rather than constantly shifting between seventh, eighth, and ninth, for example, it’ll just hold seventh for a while. Higher revs contribute to more fuel consumption. But thanks to the Raptor’s 36-gallon tank, fuel stops weren’t as frequent as you might think. Expensive, yes, but not something I had to do every couple of hours.

So with the Mercedes unloaded, the trailer dropped off at a metro-Boston U-Haul, and a quick visit to see Daniel’s family goats, we headed back toward Syracuse, and eventually, home. Now, the Raptor could just be itself – a big, comfortable truck with a fantastic sound system, easy-to-use infotainment interface, and a ton of “get the hell out of my way” presence on the road. I honestly believe the long drive wouldn’t have been as nice in a Super Duty or standard F-150 – the Raptor’s sophisticated suspension and cushy shocks make it great for long drives, and even on knobby, off-road tires, only small amounts of wind and road noise filter into the cabin.

A big, comfortable truck with a fantastic sound system, easy-to-use infotainment interface, and a ton of “get the hell out of my way” presence on the road.

With the tow job complete, my highway speeds increased to a more livable 75-80 mph, and the transmission was free to make use of all 10 of its forward gears. For the last 737 miles, my observed fuel economy was a more respectable 14.7 mpg. Still not quite the 18 mpg highway that Ford and the EPA suggest, but I admit to driving this thing like a Raptor, and Raptors don’t give a flying fork about observed fuel economy numbers.

At the end of it all, the Raptor left me damn impressed. Every single part of the trip was simple (once we finally got going). Trailering was easy. Cruising was effortless. And everywhere we went, thumbs-up and “cool truck!” greetings came aplenty. Daniel is excited to fly back to Boston, pick the car up, and drive it back to Detroit with his father. But if it came down to it, I’d grab another Raptor and triumphantly return the Mercedes to Michigan in a heartbeat.