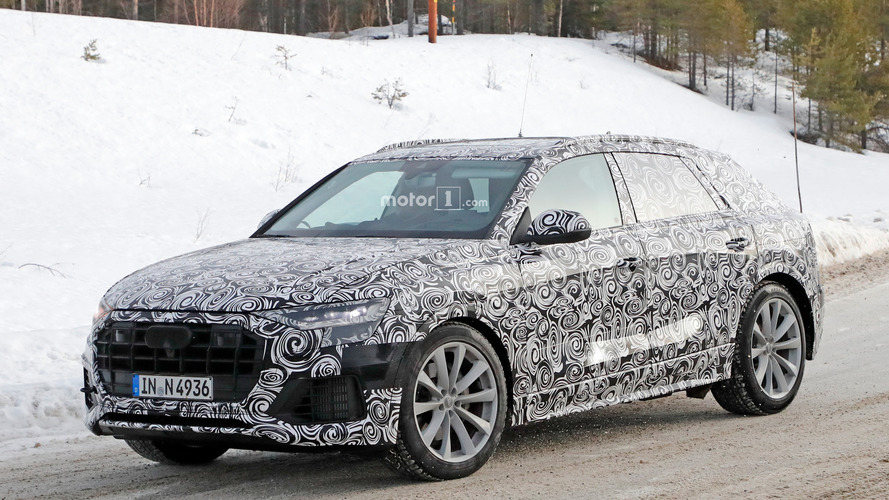 The crossover's body still has plenty of camouflage on it, but the overall design looks a lot like the concept.

The Audi Q8 is making a belated entry into the coupe crossover game against more established rivals like the BMW X6 and Mercedes-Benz GLE-Class Coupe. A fresh crop of spy photos shows that the Four Rings’ engineers continue to develop the stylish model in the snow.

Camouflage continues doing a fantastic job of hiding the Q8’s styling details, but the concealment can’t cover everything. Huge intakes in front indicate Audi might position the new model as a sporty entry in the segment, and sensors for advanced safety features are already in place. In these photos, the low-slung suspension could fool you into thinking this is a performance-oriented wagon rather than a crossover. The steeply raked rear glass makes for quite a shapely rear end, too.

The Q8 would use the same platform and powertrains as the Q7, but the styling would be completely different. Based on these spy photos, it’s hard to see a panel that the two vehicles share. Inside, there would be luxurious seating for five.

Audi premiered a concept for the Q8 at the 2017 North American International Auto Show, and it was probably an accurate guide for the production model. Under the hood, the model had a 3.0-liter turbocharged engine and plug-in hybrid, and the combo boasted a total output of 443 horsepower (330 kilowatts) and 516 pound-feet (700 Newton-meters) of torque. The powertrain could allegedly accelerate the concept to 62 miles per hour (100 kilometers per hour) in 5.4 seconds. Inside, there was a higher resolution version of the firm’s Virtual Cockpit instrument display.

The global crossover boom shows no signs of waning, and vehicles like the Q8 satisfy some buyers desire to combine these utilitarian vehicles with a more stylish appearance. Look for it to arrive sometime in 2018.

During the same year, Audi will also reportedly debut its fully electric crossover – the E-Tron. The model will be a direct competitor against the Tesla Model X.