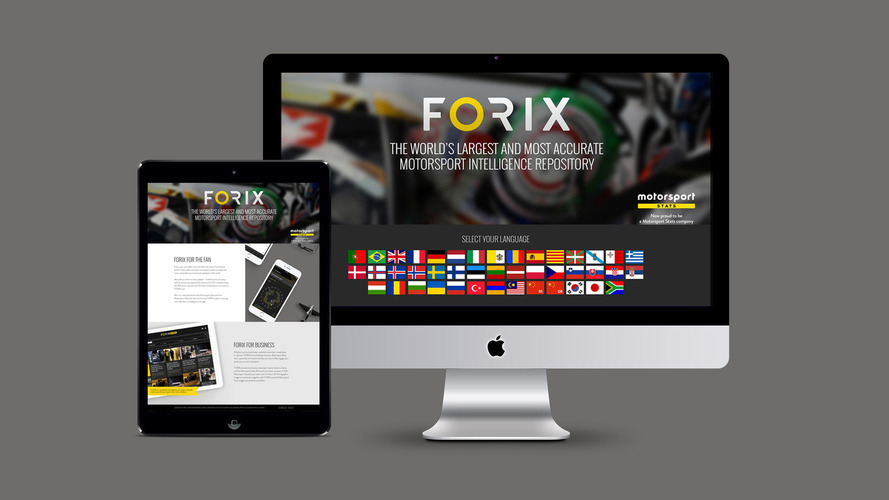 The FORIX motorsport database contains racing and rallying results from almost 500 championships spanning 3.9 million timed sessions alongside the career records of 62,000 drivers & riders and over 1,000 motorsport venues from around the world. The dataset includes historical events dating back to 1894 and covers every major series on two wheels and four – last season alone, FORIX captured and stored the results from 2,829 motorsport events.

FORIX will be come part of one of the Network’s specialist businesses, Motorsport Stats, which exists to syndicate motor racing content in words, pictures and video as well as results from the organisation’s marketleading portfolio of media titles, including Autosport, Motorsport.com and LAT Images – the world’s largest motorsport & motoring image archive that spans the entire 123 year history of the FORIX archive. Motorsport Stats also supplements this digital content with highly engaging visualised data that helps fans follow the racing performance of drivers and teams. Motorsport Stats has already established itself as a leader in the motorsports data analytics field having acquired the Wildsoft motorsport database.

With a reputation for unparalleled accuracy, the FORIX database will become the source of motor racing truth at the heart of the Motorsport Stats array of racing analysis and data products for fans as well as promoters, sponsors, book-makers and media owners. By aligning FORIX with its own assets and technologies, Motorsport Stats will take a definitive leadership position in the motorsport results and data analytics field.

Motorsport Stats’ CEO, Liam Clogger said, “Motorsport Stats has an impressive arsenal of racing and rallying data, but Forix brings with it not just a significant addition to our capability, but also a pedigree and reputation for absolute accuracy that is the gold standard in our sector. We’re delighted that João Paulo Cunha and the FORIX team have agreed to partner us with the development of data-driven products that will enrich the way motorsport is consumed on mobile, in social, in broadcast and online.

Motorsport Stats customers range from media organisations that are seeking to secure best-in-class primary source motorsport journalism from trackside at a fraction of the cost of sending their own staff to events to brands seeking unique fan engagement content such as visualised data analysis served through mobile applications.

João Paulo Cunha, FORIX’s Founder said, “Forix has been a labour of love for me for the past thirty years. It is wonderful that we can align the depth of this truly unique data source with the capabilities at Motorsport Stats and indeed more widely across Motorsport Network in order that our endeavour can fuel new and exciting products for the company and our customers beyond."

Zak Brown, motorsport.com’s Chairman said, “Motorsport Stats has a fantastic array of products breaking cover for 2017 which will re-shape the way motor racing is reported and viewed. Underpinning these breakthrough products with the depth and accuracy implicit the FORIX name makes this news a compelling proposition.”