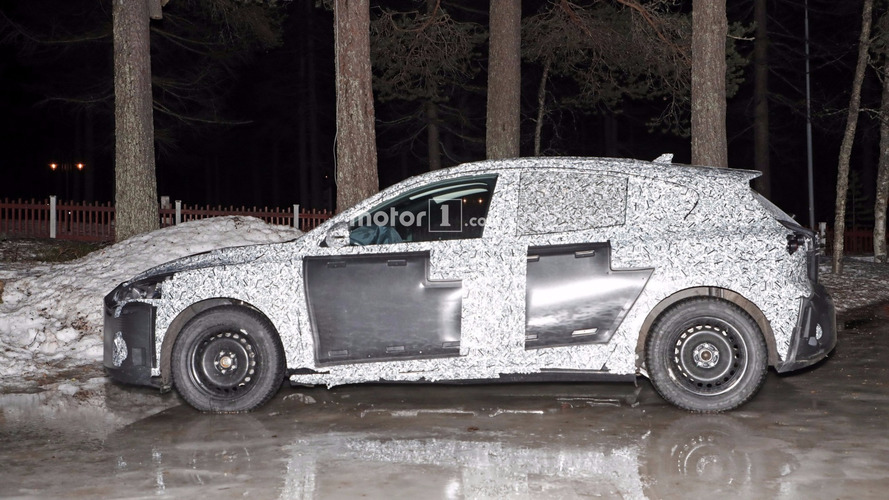 Spotted at night inside and out in 38 images.

The third-gen Focus is still holding its own despite being around since way back in 2010. However, time is a cruel mistress and that’s why Ford is working on a new model to battle the facelifted VW Golf. It was in March 2014, just one month after the refreshed Focus III came out, when a Ford representative promised the Focus IV will have the “sleek look of a coupe.” The prototype does seem to have a more raked roofline than the current model, but we still wouldn’t describe the side profile as being coupe-like.

A couple of positive aspects we are able to notice on this test vehicle would have to be the smaller rear overhang and a slightly longer wheelbase. The rear doors do appear to be bigger than those of the outgoing model, so expect passengers sitting in the back to take advantage of extra legroom. A very possible minor increase in width should free up even more space inside the cabin for the ever so popular Focus.

As it’s the case with the body, the interior was heavily camouflaged, but our agile spy photographers were able to take a shot of the prototype while it was in motion to show the overhauled dashboard. Judging by the tiny screen of the basic radio system, we’re obviously looking at an entry-level version with several physical buttons, some of which will be incorporated in Ford’s SYNC 3 infotainment system on upper-spec cars.

Considering the shape and position of the central air vents, as well as the HVAC controls and the instrument cluster, don’t be too surprised if the Focus’ interior will have much in common with the Fiesta’s dashboard pictured below.

While the “melting” wagon test mule spotted last month was baptized “Elvis,” the five-door hatchback spotted here goes by the name of “Ringo.” Both body styles are expected to shave off some weight as a result of making a more extensive use of lightweight materials, despite the planned bump in size set to bring along a bigger trunk. It’s too early to tell what will power it, but our money is on Ford’s usual array of three- and four-cylinder EcoBoost gasoline engines and TDCi turbodiesels, some of which might be tweaked for the new Focus.

The new Fiesta is undoubtedly going to be the Blue Oval’s star in Geneva next month, so expect to see the next Focus take a bow in September at the Frankfurt Motor Show. Sales of the hatchback should begin either by the year’s end or early 2018, with the more practical wagon to arrive several months later. A rugged Focus Active with black body cladding and a higher ride height in the same vein as the Fiesta Active might join the lineup later on taking into account Ford is already thinking about doing it. If you ask us, the wagon would be more appropriate to receive the Active treatment to take on the Golf Alltrack, Octavia Scout, and the Leon X-Perience, although it would need standard all-wheel drive to put up a good fight against VAG's trio.