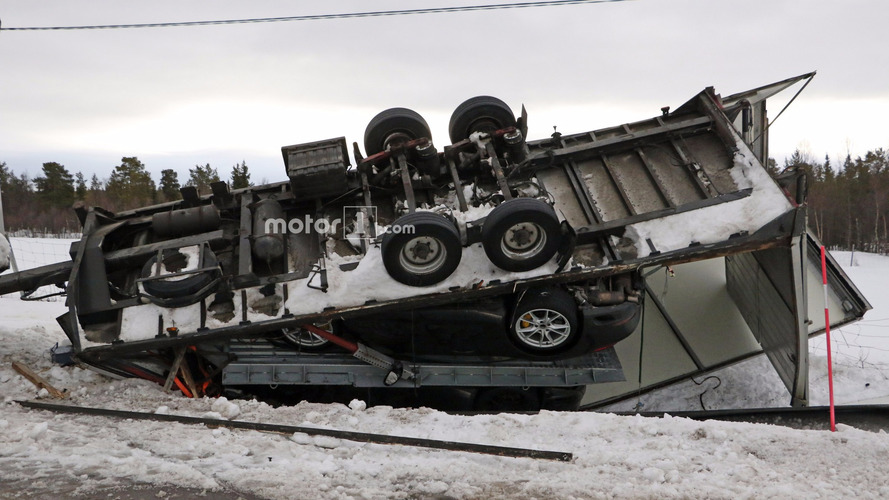 It was only yesterday when we shared a video with a semi truck landing onto the top of a police car due to strong winds, and now a transporter has been the victim of differences in air pressure. While the first crash occurred in Wyoming, the trailer carrying a pair of Porsche 911s landed with its wheels facing the sky in a ditch near a road in Sweden, about 19 kilometers (12 miles) away from Arjeplog where Porsche has its test center.

What really matters here is that everyone is safe and sound according to our spy photographers, while the condition of the two 911s is unknown at this point. Hopefully the precious cargo was insured; otherwise it is going to put a big dent into Porsche’s wallet.

We have been sharing a great deal of next-gen 911 spy shots and videos in the last few weeks, some showing prototypes with the current 991-generation attire while others had the wider 992-gen body, as it’s the case with one of the cars that was being carried. As these images of the aftermath are showing, the transporter ended sideways on the road, so unsurprisingly traffic in that area was blocked for several hours before the path was cleared.

This incident is unlikely to delay the launch of the next 911 scheduled to come out probably in the second half of 2018. Meanwhile, the current GT3 is about to be facelifted and blessed with the naturally aspirated 4.0-liter engine from the GT3 RS. In addition, Porsche is also working on a hardcore GT2 that will likely serve as a last hurrah for the 991 generation set go off with a 700-hp bang.

Check out spy shots of the next Porsche 911: