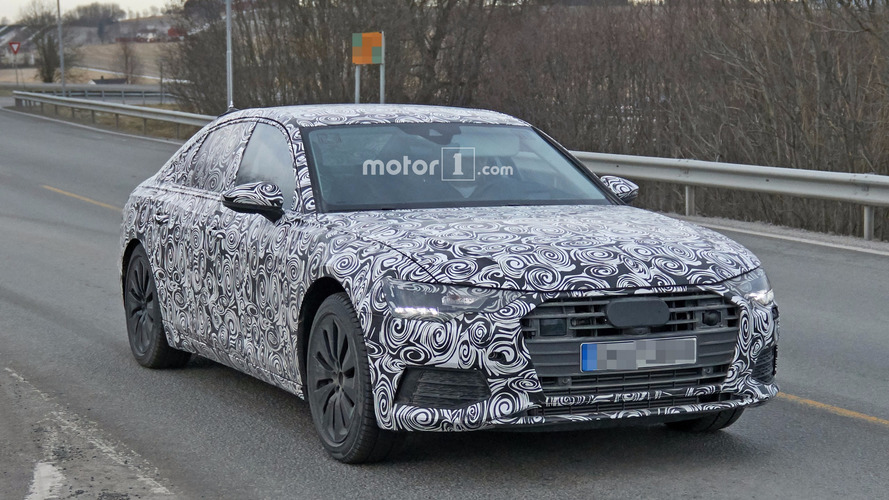 After the new A8 and A7, time has come for the next A6 to pose for the spy camera.

Audi’s design boss Marc Lichte has promised a greater differentiation among models and it seems he’s living up to the promise. The next-gen A8 due to come out later this year will herald a new design language for the Ingolstadt brand and is going to be followed by the sexy A7 Sportback and by this, the all-new A6. All three of them have been captured disguised as prototypes as demonstrated in the trio of spy shots below:

Despite the heavy amount of camouflage, it’s already noticeable the A6, A7, and A8 will be visually distinguishable from the front thanks to their differently shaped headlights. In the case of the A6, an upper character line that sits right below the window line will further set it apart from the other two luxobarges. While the outgoing A6 has the side mirrors sitting next to the A-pillars, the new one will host them lower on the doors.

Images of the A6’s derriere are not available at this point, but from what we are able to see in the adjacent pics, it’s getting a slightly shorter rear end with a smaller overhang. Speaking of which, the front overhang also appears to be a tad shorter. These changes will lend the midsize sedan a sportier appearance as previewed by the gorgeous Prologue concept.

As far as the interior cabin is concerned, expect Audi’s second generation of the Virtual Cockpit premiering this year in the A8 to trickle down to the A6 and we won’t be too surprised if the swanky all-digital instrument cluster will be standard equipment. Although not visible in the attached imagery, better repackaging brought by the new platform could bring extra rear legroom after stretching the wheelbase a bit.

Since we’ve mentioned platform, the next-gen A6 along with its bigger brothers will ride on the MLB Evo set to enable a healthy weight loss that will pay dividends in terms of performance and efficiency. A larger trunk is also on the agenda for the midsize sedan, while those in need of more cargo capacity will have to wait for the A6 Avant (speculatively rendered above) due probably within a year after the sedan's launch with a design teased by the sleek Prologue Avant concept.

First on Audi’s agenda is the A8 likely to arrive in September at the Frankfurt Motor Show, with the A7 and A6 scheduled to go official next year.