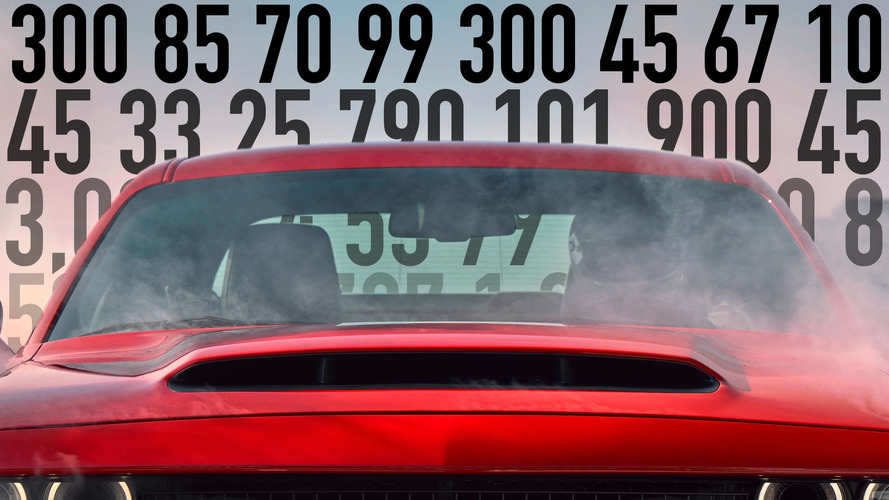 From Ford to Toyota, take a look back at some of the most eye-catching numbers of the week.

Numbers are all around us – whether we're breaking down the performance of a Ferrari 488, or comparing the price of a Model S to a Mercedes. Every week we pick out a few numbers that are so significant we have to give them a second look. Today we’re looking at key figures from Ford, Chevy, and Jeep.

Area, in square inches, of the hood scoop on the Dodge Challenger Demon. The massive Air Grabber inlet, revealed in the latest teaser for the new performance car, is said to be the largest hood scoop ever fitted to a production car. That, along with two Air Catcher intakes in the headlights, will help feed the 6.2-liter supercharged V8. How much power than engine makes, though, will remain a mystery until the Demon is revealed in April.

Maximum weight loss, in pounds, of the new 2018 Ford Expedition. The SUV switches to aluminum bodywork to save all that weight, even though it grows a little in length and width. The 2018 Expedition now has a 10-speed automatic instead of its old 6-speed, as well as new tech features like a 360-degree camera and in-car wifi.

How much less, in dollars, the Chevy Colorado ZR2 costs than the Toyota Tacoma TRD Pro. The base price for the ZR2, the most off-road-ready version of the Colorado, starts at $40,995 with destination. Big changes for the Colorado ZR2 include Multimatic dampers, a two-inch suspension lift, new wheels and tires, and assorted skid plates.

The base price, in dollars, of the Jeep Wrangler Rubicon Recon. The new model builds on top of the existing Rubicon trim level with some visual changes, like red accents and new hood decals, and functional upgrades like tougher differential covers. The Recon treatment is available on both the two-door Wrangler and four-door Wrangler Unlimited.

Number of speeds in the 2018 Ford Mustang’s automatic transmission. That’s up from six previously; the car’s manual gearbox still sticks with six speeds. There are many other revisions for the new Mustang, too, starting with a visual update that makes the car’s face a little fresher and a little more modern. Inside, look for options like a fully digital instrument cluster and MagneRide suspension. But don’t look for the 3.7-liter V6 engine: It has been canceled, leaving only the 2.3-liter EcoBoost four-cylinder and the meaty 5.0-liter V8.