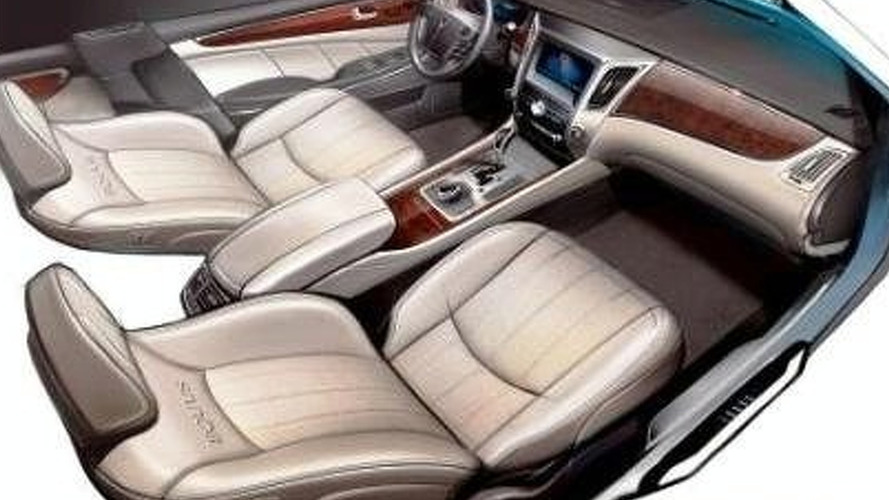 Interior sketches of the new 2010 Hyundai Equus have surfaced, just one month before the car's unveiling.

The first interior sketches of the 2010 Hyundai Equus has surfaced. This rendering comes just a couple of weeks after the vehicle was captured in grainy spy photos.

Hyundai's latest foray into luxe performance vehicles will come with a direct-injection 4.6-liter V8 engine. A 400 horsepower 5.0-liter V8 will also be available, as both engines come from the new Hyundai Theta engine line-up. An eight-speed automatic is expected.

While on the outside the car may try to compete more with BMW and Mercedes, interior designers are trying to draw the attention of the Japanese automakers' consumers. Muted, soft colors are expected in more stylish gray and brown tones. Passengers can marvel at the wood panels lining the dash and doors while they sit comfortably in the all-leather seats. A multifunction console display includes a navigation system, with many controls connected to the steering wheel. Below the automatic shift lever with Shiftronic-manual controls, you can see their "user-friendly multimedia system." This works with a knob and several buttons similar to the iDrive system.

The new 2010 Hyundai Equus is expected to be launched in South Korea on 3 March. Since this is the same date as the beginning of the Geneva Motor Show, we are hopeful the company will also show off their new luxury sedan in Europe. A U.S. launch could come by 2012.