2018 Hyundai Accent teased ahead of next week's Canadian debut

It's already shaping up to be way better in terms of aesthetics.

Hyundai’s cheapest car in North America is about to go through an overhaul, at least in terms of its exterior design. The outgoing model is not what you would call exciting when viewed from the outside, but its replacement looks somewhat promising and seems to borrow styling cues from the bigger Elantra. Seen in this short and semi-revealing teaser clip is the sedan version with a prominent front grille flanked by sweptback headlights equipped with LED daytime running lights.

The roofline appears to be a tad more sloped towards the rear where the taillights seem to resemble those of the aforementioned Elantra. We won’t be too surprised if the 2018 Accent, which is being described as an “all-new” model, has grown a little bit in size, particularly in terms of the wheelbase to free up more legroom in the back.

With the risk of ruining Hyundai’s teasing game, the new Accent will look a lot like the recently unveiled Solaris aka Verna, both inside and out: 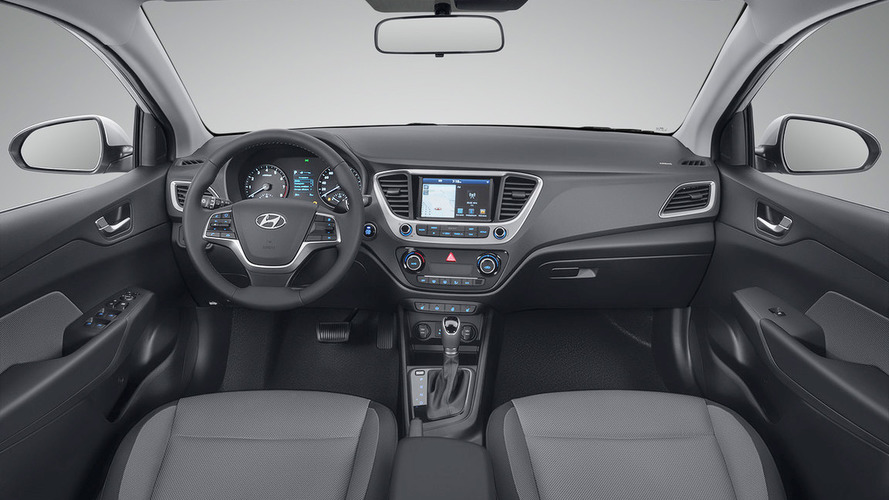 Details about what will power the U.S. and Canadian versions of the 2018 Accent have not been disclosed, but our money is on a no-frills naturally aspirated gasoline engine. The outgoing model has a 1.6-liter unit sending 137 horsepower and 123 pound-feet of torque channeled to the front axle through a standard six-speed manual gearbox or an optional six-speed automatic transmission.

In terms of pricing, we are not expecting any big changes compared to the current car, which in United States kicks off at $14,745 for the SE trim in sedan guise and goes up to $17,495 for the Sport model in hatchback flavor.

Hyundai will take the wraps off the next-gen Accent on February 16 (next Wednesday) at the 2017 Canadian International Auto Show, with sales to kick off in the months to come in North America.