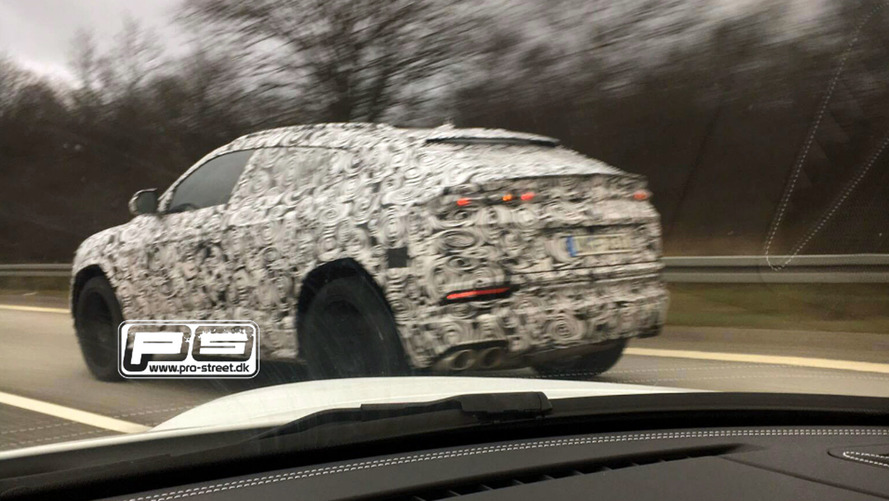 We are happy to report it looks a lot like the concept.

While the spy shots from late last year turned out to be a false alarm as the car was actually a camouflaged Audi Q7, this is the real deal. Spotted in Denmark, the Urus SUV had the production body, which despite the full disguise it wasn’t able to hide the fact the overall shape has remained faithful to the namesake concept unveiled almost five years ago.

Already noticeable is the heavily sloped roofline and the short rear overhang in the same vein as the concept. The car had only a pair of exhaust tips, but most likely the final version will have another one on the right side of the bumper. It might not have had the production-ready taillights, but even so we can observe the arrangement will mirror the concept’s rear clusters.

Lamborghini confirmed earlier this week the model is going to retain the “Urus” moniker and is set to enter pre-series production in April. According to a report coming from GT Spirit, the world premiere is set for Auto Shanghai 2017 the very same month, but several private showings will allegedly be organized sooner than that at home in Sant’Agata Bolognese.

Riding on the same MLB Evo platform as the latest Audi Q7 and the next Porsche Cayenne and VW Touareg, the Urus will be built at Lamborghini’s factory in Italy. It’s going to be powered by a biturbo 4.0-liter V8 gasoline engine, with an already confirmed plug-in hybrid setup likely to be added at a later date. A diesel engine has been ruled out, while an all-electric variant is being considered.

The company’s R&D chief, Maurizio Reggiani, has promised the Urus will be a “pure Lamborghini” in terms of styling, adding it’s going to be “much better inside and out” than the concept. Emphasis was on keeping the weight down and tweaking the aerodynamics during development, so expect the high-performance SUV to handle like a proper raging bull.

Lamborghini through the voice of its boss, Stefano Domenicali, has announced it hopes to shift around 3,500 units of the Urus each year. If the model will be a success, and we don’t see why it shouldn’t turn out to be a hit, it could allow the company to introduce a four-door sedan and might even consider a Formula 1 entry. The Urus’ performance in terms of sales is also linked to the introduction of an “entry-level” sports car, so there’s a lot riding on the Rambo Lambo’s spiritual successor.

Additional spy shots can be found at the source link below.

Lamborghini Urus By Prior Design
++404